Trusses salvaged from an earthquake-damaged barn support the roof of this contemporary glass-walled summer cottage on the shores of one of Chile's largest lakes (+ slideshow).

Carlos Ignacio Cruz Elton, Alberto Cruz Elton and collaborating architect Isabel de la Fuente, of Santiago firm Estudio Valdés Arquitecto designed the building as a holiday retreat for their families in a forest that extends along the edge of Lake Ranco.

The brothers wanted to make use of the remnants of a large barn they had purchased with two friends in the Aculeo Lagoon region, which was badly affected by an earthquake in 2010.

During the earthquake, the barn's adobe walls had completely disintegrated and the owner, who was uninterested in reconstructing them, decided to sell the building to the architects.

Doors and sections of the barn's vast roof framework were salvaged for use in the summerhouse, while the rest of the trusses were incorporated into projects undertaken by the other buyers, including a barbecue for a family in Santiago and a hotel terrace in the Colchagua Valley.

The brothers created a new structure from local timber to support the original polar wood trusses and used the rest of the wood from the barn for cladding throughout the project. 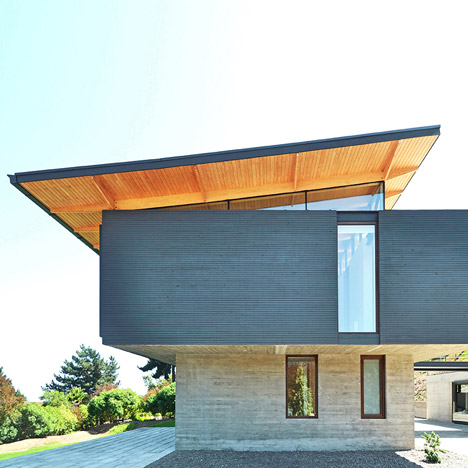 "The architects and owners of the house gave value to the wood they found in the old barn at Aculeo Lake and were inspired by the beauty of the noble material that had obtained an old look over time," Isabel de La Fuente from Estudio Valdés Arquitectos told Dezeen.

To ensure the focus of the building is on the traditional timber roof, the architects designed a minimal supporting structure with pillars positioned at three-metre intervals around the perimeter.

The trusses span the entire width of the building, meaning that no internal columns are required and facilitating the creation of a completely open-plan interior.

Large windows were inserted into the openings between the pillars to make the main living areas transparent. The thermally insulated glazing provides views straight through to the forest on either side, while ensuring the internal space is sealed and warm.

"The main quality the house wanted to promote was its location in the middle of the forest," De La Fuente added, "so the building intends to recreate the experience of being in the forest, but also being sheltered." 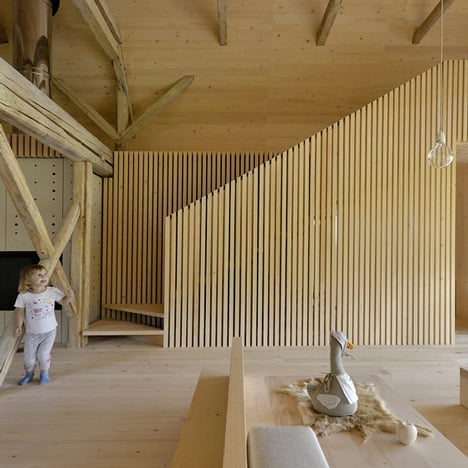 The glass-walled living area is connected by full-height doors at one end to a terrace, which is sheltered beneath an extended section of the weighty roof. A central unit containing a hearth and a television separates the lounge from the dining area.

Towards the rear of the building, the bedrooms, bathrooms, kitchen and service spaces are arranged in a corner. A solid materiality differentiates the more private functions of these rooms from the transparent communal areas.

Timber recovered from the original barn clads surfaces within the rooms, lending them a rustic quality that evokes the character of the old building.

As De La Fuente pointed out, striking a balance between the building's traditional and modern elements was a key objective of the project: "The challenge was to show honestly the source of the materials, letting the old look old, the new look new, and combining elements through their veracity, such as the modern and minimalistic glass windows with the rustic and old trusses."

Other examples of unused agricultural buildings given a new lease of life include a derelict cattle shed in Slovenia that was converted into an Alpine cabin and a 19th century barn in Germany that is now a holiday home and guest house.

Photography is by Felipe Díaz Contardo.