San Francisco designer Yves Behar's studio Fuseproject is releasing a new home access system that includes a keyless lock and video camera that are controlled by a user's smartphone (+ slideshow).

Launching today and named August Home Access, the system is designed to "revolutionise the way people interact with their homes" by enabling easier access while also improving security.

"It's a way to serve everyday users and change the way people experience the home," Behar told Dezeen. "It's where the future of technology and the home come together."

The system evolved from a cylindrical lock Behar unveiled in 2013 that replaced physical keys with a smartphone app. Both the lock and new access system were developed by Behar in collaboration with technology entrepreneur Jason Johnson.

The new August Access system consists of an updated lock, a keypad, a "doorbell" camera and a smartphone app for iOS and Android devices.

The August Smart Lock – Homekit Enabled is the modified version of the original lock. Customers can use their smartphones to lock, unlock, or check the status of their door at anytime.

Using the August app, people who aren't at home can still allow visitors to come inside. "Customers no longer need to be home to receive deliveries," said the company. "Trusted partners can securely enter the home using the August Smart Lock."

Beyond deliveries, this system is beneficial for people who use dog walkers, home healthcare workers, house cleaners, and other service providers who require home entry. "The system makes people more comfortable with third-party services," said Behar, who founded Fuseproject in 1999.

The lock, which retails for $229 (£148), features a magnetic faceplate, new micro-patterns to improve grip and rotation, and a slim chrome indicator at the top of the device, so users can visually see if the door is locked or unlocked. 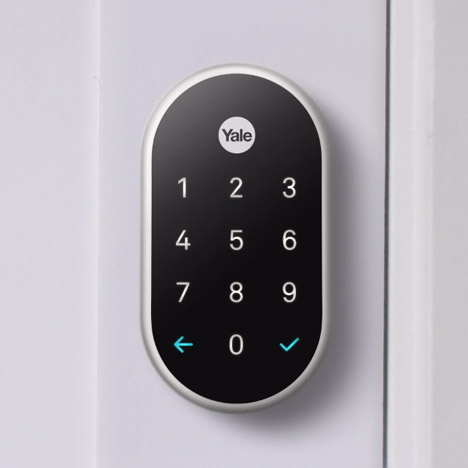 The August Smart Keypad enables people to bypass using their smartphones and instead unlock the door by entering a code. Unique codes are auto-generated for one-time or regular use.

The keypad, which costs $79 (£51), is battery-operated and can be installed within 10 minutes. "The device is slim and discreet, so it can be easily placed near the entryway or hidden away," said the company.

The August Doorbell Cam enables homeowners to see and speak with visitors at the door, in addition to buzzing them in, by using the company's smartphone app. They also are notified when motion is detected.

"The Wi-Fi camera is like having FaceTime at your door," said Behar.

The Doorbell Cam consists of a one-way, 140-degree high-definition video camera and a two-way audio system. Intelligent motion detection captures images of visitors even if they don't ring the doorbell.

The system is Bluetooth lower energy (BLE) and Wi-Fi enabled. It can be self-installed and replaces existing doorbells with the same wiring. The cost is $199 (£129).

"Smart home technology today is rapidly on its way to mainstream," said Johnson. "However, there are still many challenges that customers and service providers face when it comes to simple, secure home access."

With the August Access system, his company is "solving the problem of bringing trusted services into the home in a secure and convenient way."

Behar has designed a number of connected home products, including a thermostat for British Gas and devices that monitor soil conditions. He discussed his vision for how technology can be successfully integrated into the home during an earlier interview with Dezeen.

Other devices controlled by smartphones include a keyless lock by Yale security company and the technology firm Nest and a thermostat by the US product and engineering company Honeywell.

Architect Rem Koolhaas has spoken out against the way technology is infiltrating buildings, saying it is "totally astonishing" that people are willing to sacrifice their privacy for convenience and describing the rise of smart systems as "potentially sinister".