The pedestrian bridge, which will be located on the Oudezijds Achterburgwal canal in the Dutch city's red light district, is being printed in steel by six-axis robots, which will "draw" the structure in the air.

At a ceremony to launch the project on Friday, Laarman told Dezeen that the project could usher in a new era of digital manufacturing.

"Everyone is talking about 3D printing but not so much is actually possible yet," Laarman said. "We are trying to lift the world of digital fabrication to a higher level."

The bridge, which will be eight metres long and four metres wide, will be printed in one piece in a former shipbuilding hangar in the Amsterdam's NDSM shipyard and then transported to the city centre.

Work will start next summer. Earlier plans to print the bridge in situ had to be abandoned as it was "just too dangerous".

Laarman is unsure how long the manufacturing process will take, although completion is not expected before 2017. The design of the bridge will be finalised now that the location has been decided. 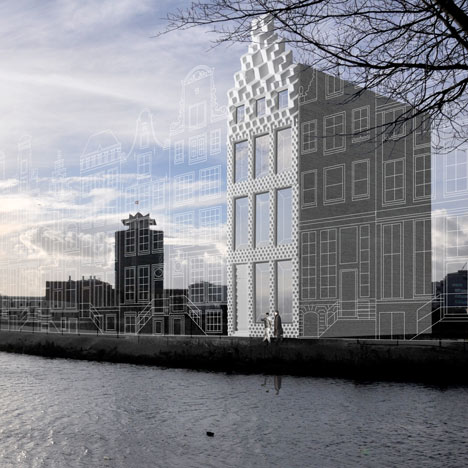 "The bridge design is a process that will take some time," Laarman said. "Now we know the location we can start working it out together with our partners."

The Dutch designer has launched a new company called MX3D to develop the technology used to build the bridge, which involves bringing programming robotic arms to control welding machines.

The robots will build up the structure by forming struts out of thousands of precisely placed blobs of molten steel.

The technique can also be used to print with other metals such as copper or aluminium.

"It opens up a whole new type of 3D printing," said Laarman. "It's about creating strong but unique structural things."

He added: "Printing with robots means you're not limited any more to the boundaries of the printer. Theoretically you can print infinitely large structures." Salomé Galjaard, senior designer and project leader at Arup, said the project represented a "really big step" for 3D printing of structures at an architectural scale.

"What's great about this project is first that it's infrastructure, which is possibly more conservative than the building industry," said Galjaard, who worked on a pioneering project to print architectural components in steel.

"It might take a couple of years still but we really think that the bridge will perform," she told Dezeen at Laarman's launch. "It will be great exposure for 3D printing."

Laarman, 35, graduated from Design Academy Eindhoven in 2003. The bridge project builds on earlier research by the designer in how to print freeform structures in first plastic and later steel. Plans for the bridge were first announced in June this year.

Below is the transcript of the interview with Laarman:

Joris Laarman: The basic principle is super simple. It's a robot and a welding machine combined. But the smart part of it is the software; how we control the machine. What's nice about it is that with smart software we can make an old machine very smart, make it do something smart.

Joris Laarman: A robot is a very old machine actually. It's made to do one thing again and again, one movement. It's made to pick and place. But by using smart software we can make it move any way we want; it doesn't have to be a repetitive movement. It can do really complex movements and it's able to communicate in real time with the welding machine. That's what makes it possible.

Marcus Fairs: There has been a lot of hype about 3D printing.

Marcus Fairs: What does this technology allow you to do that other types of 3D printing can't do?

Joris Laarman: Everybody of course is talking about 3D printing, but the cool thing about steel is that it immediately becomes something that's really functional. So you can actually use it. The material is very durable.

We've focused on printing outside the box. Printing with robots means you're not limited any more to the boundaries of the printer. Theoretically you can print infinitely large structures. If the robot prints its own track as it goes along you can print really large-scale objects.

And it's printing in durable materials, like steel or any other type of metal. It opens up a whole new type of 3D printing. It's about creating strong but unique structural things.

Almost everything you see around you looks the way it does because of the limits of industrial machines. With our technology it makes it possible to make much more complex or organic shapes. So it opens up a whole new form language. It also opens up the possibility to manufacture locally. So it doesn't have to be produced in a factory on the other side of the world.

Marcus Fairs: How did the bridge project come about?

Joris Laarman: We were in San Francisco with Autodesk, our first partner, and we were brainstorming about what would be the ultimate poster project for this technology. We thought that a 3D-printed bridge over a canal in Amsterdam would show all the facets of the technology.

I think it's a really beautiful metaphor to connect 3D printing with the historic centre of Amsterdam. The design will take into account its location and will show the best of both worlds, old and new.

Marcus Fairs: Originally you were going to print the bridge in situ, but now you're going to do it in a warehouse. Why?

Joris Laarman: We really wanted to print it at the actual location but it's just too dangerous. It's one of the busiest areas in Amsterdam. So it makes much more sense to print it here.

Marcus Fairs: In one piece?

Marcus Fairs: What are the dimensions?

Joris Laarman: It's about eight metres by four metres. It's not a big bridge but we have to start somewhere.

Marcus Fairs: How long will it take?

Joris Laarman: We don't know yet! The design is a process. We need to generate a structure that will take everything into account, including its location in the city centre. This is also a process that will take some time. The beauty of parametric modelling and digital fabrication is that we can make structures unique for each location, and so we will.

Marcus Fairs: You set up a new company, MX3D, to develop the metal-printing technology. How did that come about?

Joris Laarman: After we figured out how to work with these metal printers, we thought it was so promising that there was a whole world of things we can do with it. We wanted to produce beautiful, large-scale furniture pieces but there wasn't a tool around with which to do that. So we developed it ourselves.

After a while it didn't make any sense any more to keep it in our small design studio. We wanted to create a whole company around it. That's what became MX3D.

So now it's a new startup company that's developing technology. At the moment we're being approached by all kinds of companies, like our new partners ArcelorMettal, which is providing the steel development, Heijmans construction company and Autodesk, who are working with us on the software. There's interest from offshore companies. And we've been approached by different institutions regarding printing in space, for instance.

It opens up a whole new type of 3D printing

Marcus Fairs: What else could you do with the technology?

Joris Laarman: The bridge is a really challenging project. It will show us all the things we need to develop over the next two or three years. So it's really hard to say what we could make with it.