New York-based SHoP Architects has revealed plans for a major extension of the SITE Santa Fe gallery in New Mexico, featuring a textured facade that takes its cues from traditional Navajo patterns (+ slideshow).

The new wing will more than double the size of the gallery's existing facilities, creating just under 15,000 square feet (1,400 square metres) of new indoor and outdoor spaces for exhibitions, education and events.

SHoP Architects – which is also working on a new Miami tech district and Uber's San Francisco campus – was selected following an open call for proposals in 2013.

The design features a prow-like form, as well as a folded facade that references Navajo pattern making, according the firm. The aim was to "express a contemporary aesthetic" but also to reflect the "rich history and culture of the American southwest".

SITE Santa Fe is located in the heart of the Santa Fe Railyard – an area that was completely regenerated in 2008 by architect Frederic Schwartz and landscape architect Ken Smith, and is now a popular public space.

SHoP responded to this by designing an entrance sculpture court and a rear porch that will both be framed by the gallery extension, creating a relationship between the building and its surroundings. 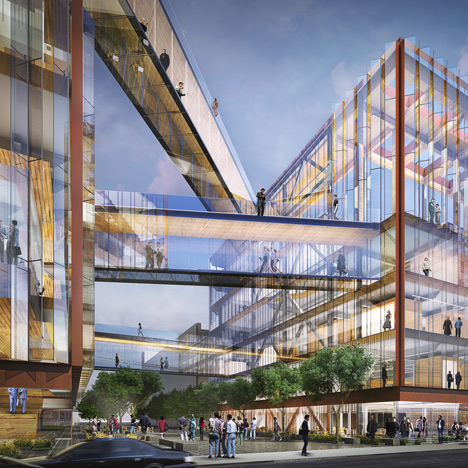 "Our design is based around the idea that art doesn't have to be experienced in isolation," said studio principal Christopher Sharples.

"The galleries will become unique and intimate places to interact with art, even as the building itself opens up to the neighbouring park, the life of the Railyard district, and gives SITE a greater presence in the landscape of the city as a whole."

Other new facilities will include an extra exhibition gallery,  a lecture hall and events space and a 540-square feet (50 square metres) education classroom.

The gallery was first established in 1995 to organise the first international biennial of contemporary art in the United States, and it later expanded to host exhibitions all year round.

Construction of the new wing is expected to start next year, and it is scheduled to open in summer 2017.

"SHoP's design of our new building addition reaffirms our important role in the contemporary art world, positioning SITE for the next generation with a bold building that matches the inspiring expressions of the artists we champion," said Irene Hofmann, the director and chief curator of SITE Santa Fe.

"SITE's early commitment to the railyard 20 years ago has acted as a catalyst for the redevelopment of the neighbourhood, attracting galleries, retailers and other arts organisations," added SITE board chair Andrew Wallerstein.

"Today the railyard is a hub of contemporary art and community. With this bold expansion designed by SHoP, SITE will build on its legacy."