Rows of brightly lacquered metal slats wrap the upper levels of this multi-storey car park that serves the maternity and oncology wards of a hospital in A Coruña, Spain.

Four of the car park's five levels are embedded into the slope to negotiate the dramatic differences in ground level. The fifth parking level is on the flat roof of the complex, which offers glimpses of the sea.

"The height difference of the plot generates a great natural wall formed by rock and vegetation," explained the architects. "This arrangement results in the creation of several entries from different levels of the street that borders the plot." 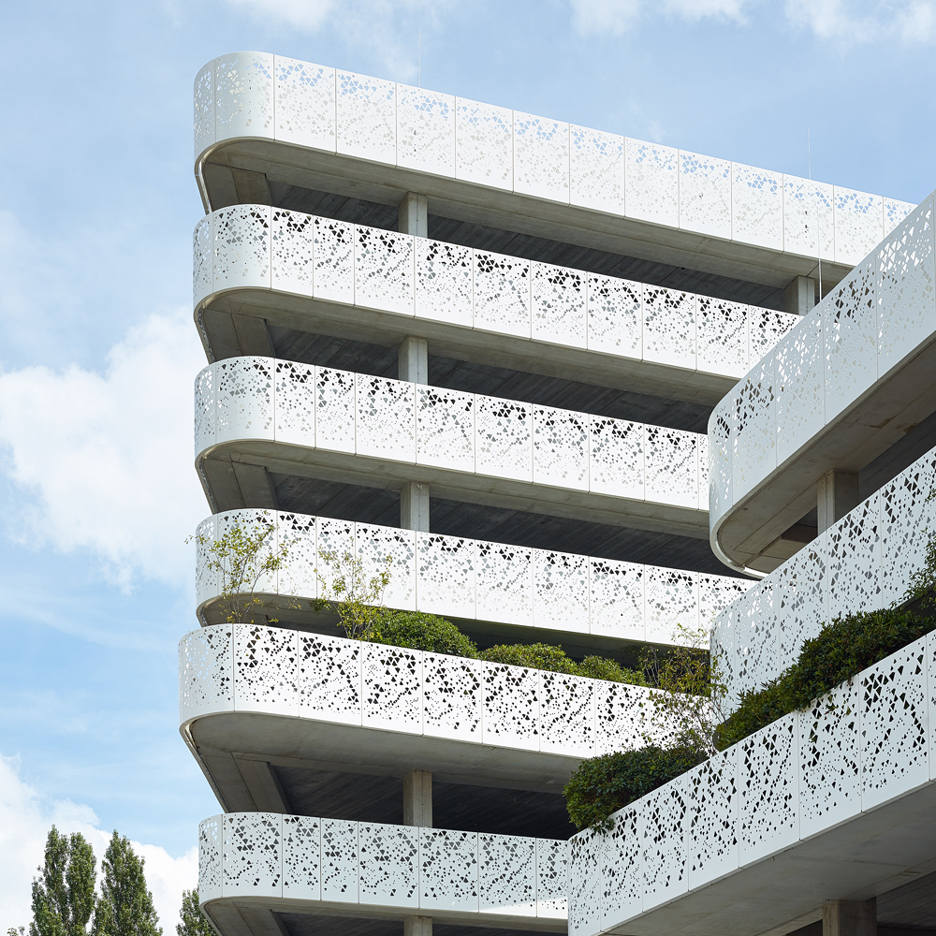 The coloured slats that surround the open ends of the floors give the building a striped appearance, while the base is wrapped in board-marked concrete panels. Gaps between the slats help to naturally ventilate the building.

"The facade is made out of prefabricated concrete textured panels in the areas in contact with the ground, creating a hard basing, on which a coloured light metal slats box rests, which recall the aspect of vehicle bodies," explained the architects.

Luis Vidal + Architects gave the facade of a hospital in Ibiza a similar appearance by using stripes of photoluminescent paint, which also causes the building to glow faintly after dark.

At the A Coruña project, an elevated pedestrian bridge extends from the car park's circulation tower to connect the two health care centres, which are also linked by a road at ground level and via the lower levels of parking.

"This nucleus becomes a landmark, giving character to the building, so it was very important to work on its image," said the team.

The 10,000-square-metre building has 366 parking bays distributed across its staggered floors, which are linked by ramps.

Abscis Architecten has also recently designed a hospital car park – a structure in Ghent, Belgium, which features a facade of perforated balustrades.

Photography is by Héctor Santos-Díez.