Long horizontal windows step around the matt black facade of this family home in Osaka by Alphaville Architects to frame different views of the nearby Yodo River (+ slideshow).

The Kyoto firm named the project Spiral Window House after the succession of openings that are staggered across the walls.

The positioning of the windows is designed to give views of the river, which flows from Lake Biwa through the city to the sea via Osaka Bay. The twisted arrangement also helps to prevent the building being overlooked from the properties and roads that hem it into its narrow plot.

"The client's demand was to live while appreciating the Yodo River flowing in the front of his eyes, and also to enjoy the annual firework competition of Yodo River from the rooftop terrace," explained the architects. 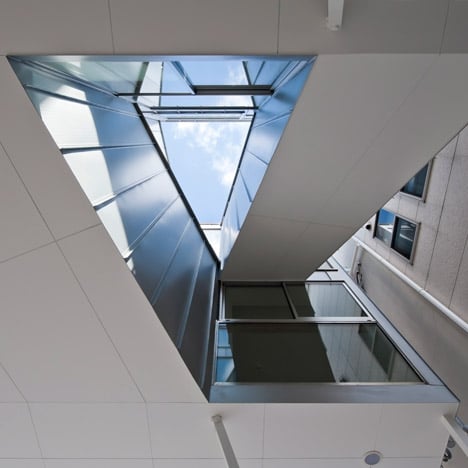 "That's why we displayed spirally small openings from the ground to the third floor, as if they were swirling."

The house has a black-painted exterior, and a bright white interior.

The high position of one window blocks views into the master bedroom and entrance hall that occupy the ground floor of the block. The open-plan living area on the floor above features four large windows that frame views of the street, river and treetops.

The children's bedroom sits on the top floor of the building, which is set at an angle to accommodate a triangular terrace.

A wooden staircase winds clockwise up through the interior in the opposite direction to the windows. It emerges through triangular cutaways in the corner of each floor.

"Although it's a minimal operation of geometry, by the line of flow and the openings nestling simultaneously, and reversing sometimes, a sophisticated relation with the exterior is created," added the studio.

Each of the walls is supported by a steel frame that follows the same spiralling succession as the windows, helping to bear the weight of the irregularly shaped structure.

In a recently completed house near Osaka, the firm chose to place windows within a deep slice in the building's side to give views between the two sections of the house. Similarly, a steel-clad house by the studio in Kyoto hides its windows in two crevices.

Photography is by Kai Nakamura.