Suppose Design Office designed the space with room for just eight diners, who sit around a long wooden preparation bench topped by nothing but a chunky wooden chopping block and a presentation box.

The space is dimly lit by a sparse selection of spotlights. Primarily directed towards the chef, they give the act of sushi rolling a performative quality. 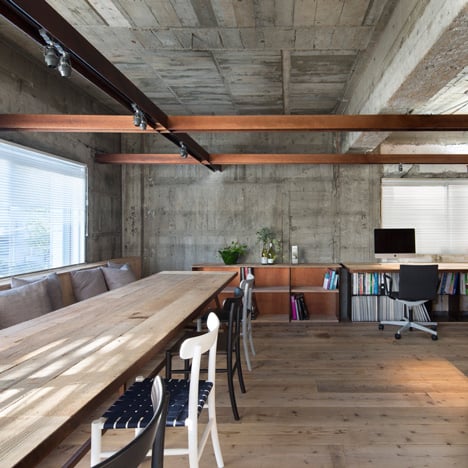 "At the moment a sushi chef hand rolls sushi above a stage of a beautiful chopping board in a dim and silent space, the spot becomes a sushi restaurant," it explained. "The action makes the stage obvious, and the sushi becomes an art of food created in a minimum time."

Minimalist artworks adorn white walls framed by thick wooden columns, and a small spot-lit sculpture sits at one end of the table.

The pared-back appearance of the space is based on the Japanese philosophy of wabi-sabi, which finds beauty in imperfection and transience. When applied to architecture, this results in the stripping away of inessential items to place emphasis on irregular textures and features.

"Arts and art of food has an equal value here. And the old timber counter and the scale of the space make an atmosphere of wabi-sabi," said Suppose Design Office. "People can feel instinctively the excitement of eating."

At a Japanese cultural club in Paris, architect Fumihiko Sano also made use of dim lighting and textured timber to create an atmospheric reception area. The club provides a decorative and ceremonial gift wrapping called service called origata, which is performed around a long wooden table like that of the sushi restaurant.

Suppose Design Office also recently completed the fit-out of its own Tokyo atelier, which features exposed concrete and recycled timber – a pairing that is popular with the studio.