Modebelofte 2015 presents work from 42 international designers from 15 bachelor and masters fashion courses at the stadium, which is home to football club PSV Eindhoven.

Curated by designers Niek Pulles and Harm Rensink, the garments were selected for their innovative take on sport and performance apparel, relating to the theme Performing Advancers.

"This year the theme is related to the world of sports, for our relentless quest for self-improvement, for performance enhancing innovation, and for pressing the limits of what is humanly possible and imaginable," said the curators.

Mannequins positioned in active poses stand within tunnels installed around the edges of the pitch, each with a different coloured interior.

Among the garments on show are Vera de Pont's Pop Up clothes that are assembled without stitches and moiré-effect jumpsuits by Anouk van de Sande – both also featuring at the Design Academy Eindhoven graduate exhibition.

Other Dutch-educated designers represented include Ting Gong from the Gerrit Rietveld Academie in Amsterdam, who crafted garments and accessories from a translucent mesh, using an ultrasonic welding machine and a heat press. 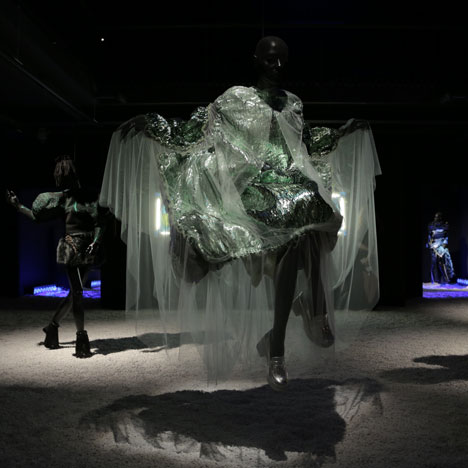 Among those selected from this year's crop of Central Saint Martins graduates are James Mitchel, who was influenced by trawlermen's workwear, and Jim Hu, whose sculptural garments are built up from a fine red mesh.

Gabriele Skucas, also from the London institution, was chosen for her garments knitted into three-dimensional toy-like shapes, while Matilda Norberg from London's Royal College of Art is presenting knitwear translated into unusual shapes.

Graduates from The Hague, Antwerp, New York, Taipei, Rotterdam, and across the UK are also featured for their innovative use of materials, silhouettes and production techniques.

Modebelofte – which translates as "fashion promise" – was set up by Ellen Albers, owner of the Eindhoven concept store You Are Here and takes place in the city during the annual Dutch Design Week.

"By creating a platform for the most adventurous and visionary innovators from the latest generation of fashion talents during such an internationally well-attended design manifestation, Modebelofte seeks the dialogue with likewise innovative companies, universities, media and the public," the curators said.

The 2015 exhibition runs from 14 to 25 October during Dutch Design Week, which takes place from 17 to 25 October 2015. Other projects on display as part of the citywide event include 3D-printed high heels that are "more comfortable than normal shoes" and clothes that consumers can download, customise, produce and self-assemble.