Almost 20 years after buying a shophouse in a historic Singapore neighbourhood, local architect Maria Warner Wong and her team have converted the building into a new venue for art and design (+ slideshow).

Warner Wong bought the property in 1996, seven years before her and business parter Wong Chiu Man established their architectural studio WOW Architects. At the time she thought she could replace the building with a new live/work space for herself.

The architect faced a few hurdles – the largest being that the building was heritage listed in 2003, limiting the options for redevelopment. In the end, she decided to restore and extend the building to create a new cultural space for the city.

"After the building was gazetted by the Urban Redevelopment Authority, we could no longer realise the plan to rebuild," she told Dezeen.

"We had to keep the existing building, but it did have a small amount of land at the back that we were allowed to use for an extension."

"In the end it took us 19 years to complete, because in the years between we were nurturing a practice and a family, plus a few global economic obstacles came along," she added. "In between, we were focused on getting the building approved."

Named Niven Road Studio, the building is located in a residential neighbourhood in the centre of the city, between the busy Middle Road entertainment district and the quiet Mount Emily park community.

It was originally built as a shophouse – a historic building typology in Southeast Asia that typically contains a shop at ground level and a residence on one or two floors above.

As many of Singapore's old shophouses have now been demolished, those that remain are often granted heritage listings – prompting imaginative refurbishments. Recent examples include a house with a swimming pool in the centre and a cafe that specialises in eggs.

"This shophouse had been used in the past as a residential property and as worker housing," said Warner Wong. "But we began to realise that the space could be used in many other ways, as a catalyst for creative collaboration." 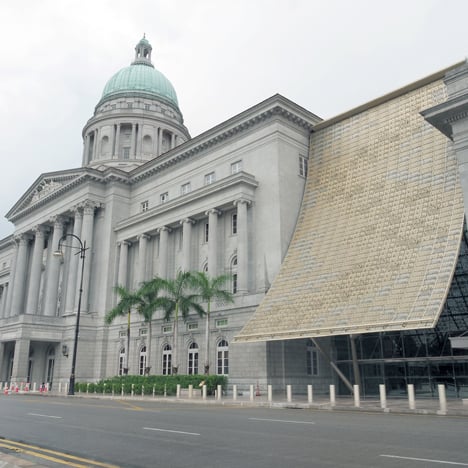 WOW Architects restored the building's original interior, leaving surfaces unfinished to reveal rugged brickwork and the undersides of terracotta roof tiles. It then added a taller extension at the rear, using bare concrete and glass.

The aim, said Warner Wong, was to provide a visible contrast between the new and old sections of the building.

"Beyond the old and new exterior, the architecture presents a rich duality of spatial experiences formed by the architectonics of the load-bearing off-form concrete walls against the existing dual-tone red brick walls and the ventilated terracotta roof tiles."

The project was completed earlier this month. WOW Architects will run the space, under the banner name WOWHAUS. One of its first events will be part of the fringe programme for the World Architecture Festival, which takes place in Singapore from 4 to 6 November 2015.