"Ridiculous choices" made by the music industry have made it difficult for furniture companies to argue against copies of products by designers like Charles and Ray Eames, according to the Modernists' grandson.

"The music industry, because of its really ridiculous choices in how it has treated intellectual property, has made it harder for people to make arguments [against design copies]," said Eames Demetrios, who runs the Eames Office set up by his grandparents in Los Angeles.

In the early days of the internet, the music industry was slow to clamp down on copyright infringement through digital file sharing – allowing easy access to tracks for free. Music is also now available through streaming services like Spotify, Deezer and Rhapsody, which offer cheap monthly subscriptions compared to the cost of purchasing albums online, but pay artists much less.

"Now you have bands where all the members work at Starbucks, but they have a hit record," Demetrios told Dezeen.

"Copyists are eating away at the creativity of our industry"

According to Demetrios, this has led consumers to adopt a "why pay for it if it's cheaper or free" attitude that has impacted the way they think about buying furniture.

"I think the music industry hasn't done anybody any favours by adopting the approach that it did," he said.

"If you had to ask your grandfather in 1950 to make a copy of a chair he would have said 'okay but it'll take me a week'. Now if you asked someone, the image in their mind of copying is to drag a file from one side of the desktop to another. They think of everything as cloneable."

Demetrios spoke to Dezeen at the opening of a retrospective exhibition of Eames work at London's Barbican Centre, where furniture items now produced by brands Herman Miller and Vitra are on display.

Earlier this year, the head of replica furniture company Voga argued that these designs should be affordable for everyone. But Demetrios countered that the licensed products are not much more expensive than they were when first produced in the 1950s, once inflation is taken into account.

"If you look at the prices compared to inflation, the chairs are maybe a little bit more than when they first came out," said Demetrios. "I think one of the challenges is that we have an expectation that everything in our home should be cheaper and better."

"The thing about the knock-offs is that they are not that much cheaper," he said. "The knock-off of the lounge chair is still a big choice for me and everybody that I know, and then you get something that is not quite right." 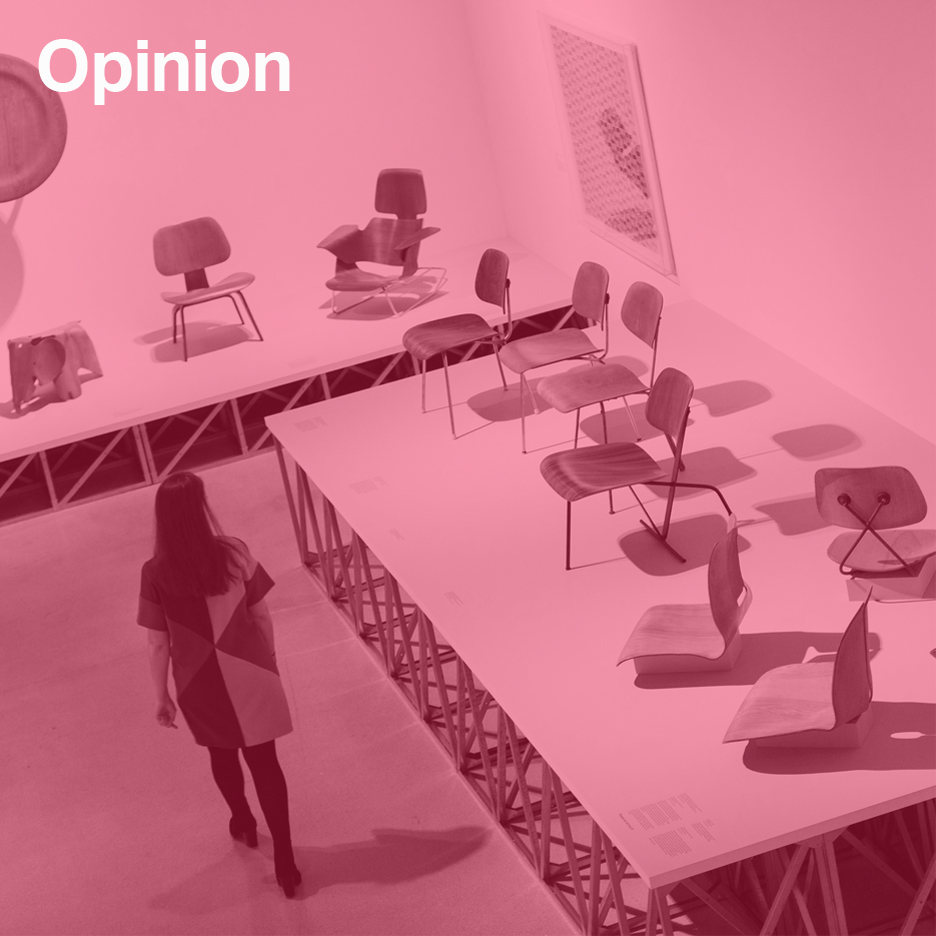 Demetrios and other members of the family run the Eames Foundation, and are dedicated to preserving the legacy of Charles and Ray. This includes releasing updated versions of their furniture with newly developed, more environmentally friendly materials, and making sure customers receive the best possible versions of their products.

"I believe they would have always fought to keep [the designs] as affordable as possible, but what they said they wanted to do was to get the best to the most, for the least," said Demetrios.

In a recent Opinion column, Sam Jacob commented on how the Eames name has taken on a life of its own and is now used to help sell junk shop remnants on eBay.

Demetrios said that part of his task was to help consumers see that the name is "not just a label".

"People have told me that they have saved for ten years in their career to get [an Eames] lounge chair," he said. "And if they are going to do that, then it is my job to make sure that it is exactly as awesome and perfect as they want it. That's the best I can do to fight copies."