The 235,000-square-foot (21,832 square metres) addition sits behind the institution's Postmodern Mario Botta-designed home and will more than double the museum's footprint.

The new building's distinctive facade is made of fiberglass-reinforced polymer panels punctuated by horizontal band windows. Its form contrasts with Botta's patterned masonry and regular geometries.

"It's like having a dance partner," Snøhetta founder Craig Dykers told Dezeen. "You don't want to be exactly like them, as you'll step on each other's feet all the time. A good dance partner is someone who has their own personality and can move freely together with you."

The rippled surface of the panels was inspired by San Francisco's foggy weather and surrounding waters, according to the architects. 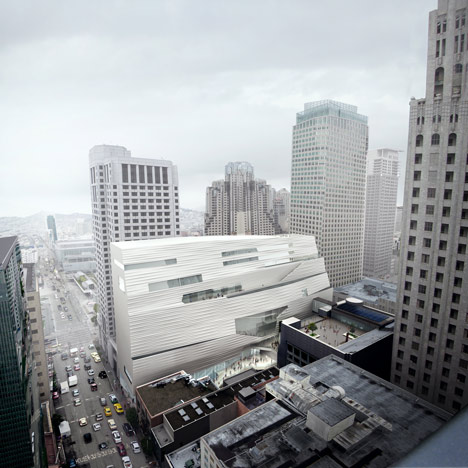 The 10-storey museum building includes events spaces, a flexible theatre, education and conservation centres, a library and archives, administrative offices, and 100,000-square-feet (9,290 square metres) of galleries distributed over five floors in the middle of the building.

The free admission, glass-fronted ground floor gallery will open with a presentation of monumental sculptures by Richard Serra.

The facility will also include an outdoor sculpture garden with a living wall with 16,000 plants, including many native species.

In 2013, the architects revealed the design for a monumental staircase that will link the Botta building with the new addition.

The Mario Botta building opened in 1995 and is considered a late and controversial example of Postmodernism.

Dykers defended the merits of the earlier building.  "It was a meteorite landing on the site. It did what it needed to do," he said.

Botta told Dezeen the design for the new building resembled a "mute wall, an enlarged wardrobe." He added, "I hope the accomplished work will be better and prove me wrong."

The museum also announced an official opening date of May 14, 2016. Snøhetta was selected for the project in 2010, beating Adjaye Associates, Diller Scofidio + Renfro, and Foster + Partners. The project broke ground in May 2013.

Snøhetta is currently working on a number of projects in the West Coast including a new public market building in Portland, Oregon and a a river walk in Willamette Falls, Oregon.