Oak joinery, white-painted bricks, and concrete flooring were used to make the interior of this new house in Suffolk, England, more contemporary than its traditional pitched-roof exterior (+ slideshow).

West Stow Lodge was designed by London architects Project Orange for a family with three young children in a village near Bury St Edmunds. It replaces a 1970s house on the site, which the family lived in for a year, but always planned to extend or replace.

"They were clear that they wanted this to be their 'forever' house, and they wanted it to be as large as possible within the available budget," architect Christopher Ash told Dezeen. "The existing house was unremarkable, and not worth retaining."

The 450-square-metre house is more than twice the size of the previous home. It has a pitched roof and an exterior of white render and red bricks to mirror the local architectural style, but features subtle details to distinguish it as contemporary.

"While the initial impression is of pitched roofs and chimneys, a study of the details portrays something more modern – a compositional play with recess and projection, shadow and light, and horizontal and vertical emphasis," said Ash.

"We wanted to explore a traditional form, while making a house that was quietly of its time."

The three-storey house has a formal sitting room, study and music room on the ground floor, as well as a more informal open-plan kitchen, dining room, living space at the back. 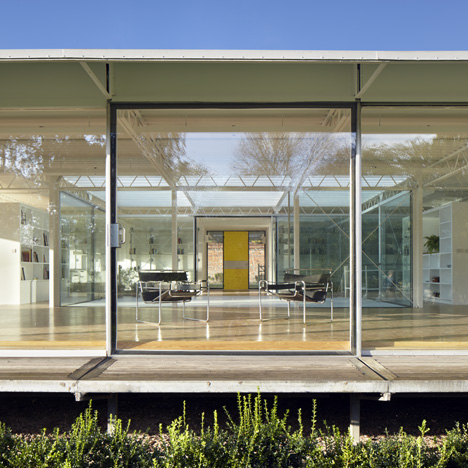 The first floor has five bedrooms, each with their own bathroom or shower room, and the second floor, which is tucked beneath the roof pitch, has an open-plan play area.

Throughout the house, the architects chose a restrained palette of materials, including white-painted bricks, polished concrete flooring, and oak for all the joinery, which matches the window frames.

Interior details were kept minimal to enhance the contemporary quality of the house. Shadow gaps were used instead of skirting boards, door frames sit flush within the walls, and surface treatments such as tiles or wall coverings were avoided.

"The interior materials echo the exterior, and are intended very much as an honest expression of the construction," said Ash.

"The oak of the windows carries through to the joinery, the brickwork of the chimneys is left exposed and painted white, and the external form is expressed with the double-height corridor and vaulted ceilings of the bedrooms."

Wood and brick are often used – either in their raw state or painted – to bridge old and new styles of architecture. Other buildings that take this approach include a barn-inspired extension in Australia with a plywood interior, a renovated 1960s brick house in Buckinghamshire that has been painted black, and a Victorian boathouse in Berkshire with a contemporary oak kitchen beneath its original timber beams.

To emphasise the sense of visual continuity throughout West Stow Lodge, Project Orange spaced the mullions of all the windows evenly, at 600-millimetre intervals.

"As a counterpoint to the more romantic quality of the home's form, we applied a rigorous order to the composition of the window frames," said Ash.

"This 600-millimetre spacing is used for all windows, screens and external cladding elements, and it is this rhythm that brings order to the design, and prevents any descent into whimsy."

A row of glass doors along the corridor next to the stairs opens up to a courtyard at the rear, providing a direct route from the front door to the garden.

"The intention was to allow for natural ventilation, and also allow guests to arrive at the front door and flow straight through to the garden," said Ash.

The house was completed in 15 months, and built with a steel frame, load-bearing masonry walls and external insulating render.

The landscaping of the site, which is adjacent to a medieval church, and features a stream and numerous willow trees, was developed in collaboration with Janey Auchincloss Designs.

"Within this setting, the house can be seen as a nuanced, contemporary exploration of the domestic vernacular architecture in Suffolk," said Ash.

"This is a development of the approach that the directors of Project Orange first explored in their own house, Orange Cottage, which is in the largely Tudor village of Lavenham, Suffolk," he added.