Danish toy brand Lego, which has built a fan base among architects and designers with its colourful building bricks, has been accused of "censorship" by Chinese artist Ai Weiwei after refusing to supply an order for an exhibition in Australia.

Ai Weiwei's Beijing-based studio is organising an international donation drive of Lego bricks via social media, after the artists was denied a bulk order of the popular building blocks.

According to the artist, Lego refused to deliver an order placed on his behalf by the National Gallery of Victoria in Melbourne, where he is working on an exhibition due to open in December 2015. He had been planning to use Lego pieces to create a new work about freedom of speech.

"As a commercial entity, Lego produces and sells toys, movies and amusement parks attracting children across the globe," said the artist in an Instagram post on 25 October. "As a powerful corporation, Lego is an influential cultural and political actor in the globalized economy with questionable values."

"Lego's refusal to sell its product to the artist is an act of censorship and discrimination."

The post was accompanied by an image showing a toilet bowl filled with Lego bricks, with a quote from the Lego's Twitter biography: "We're here to inspire and develop the builders of tomorrow".

In the past Lego has capitalised on its popularity in the creative community, releasing a new set of blocks aimed at architects and designers in 2014.

Established architects have also shown the wider possibilities for the toy building blocks, with Steven Holl and Bjarke Ingels – who described the bricks' proportions as the "golden ratio of architecture" – among the names commissioned by artist Olafur Eliasson in 2015 to contribute Lego buildings to a fictional cityscape installation in New York.

The Why Factory – Dutch architectural firm MVRDV's think tank – used Lego to build 676 miniature towers, which were presented at the 2012 Venice Architecture Biennale. 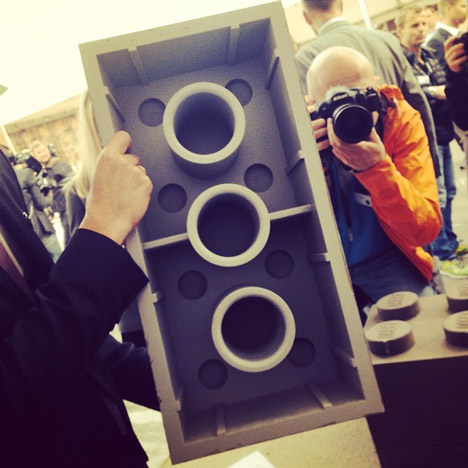 Ai published an explanation given by the brand for declining the order from the Australian gallery's curating team.

"We regret to inform you that it is against our corporate policy to indicate our approval of any unaffiliated activities outside the LEGO licensing program," said Lego in the statement quoted by Ai.

The statement also detailed restrictions around the Lego trademark, or using the bricks for "political, religious, racist, obscene or defaming statements."

Ai, who designed an installation of interconnected bicycle frames for the Venice Architecture Biennale 2014, has previously used Lego in various art works.

In September 2014 he opened the @large exhibition in the former Alcatraz prison in San Francisco Bay, which included six Lego carpets featuring 175 portraits of political prisoners including Nelson Mandela and Edward Snowden.

According to The Guardian, Lego spokesman Roar Rude Trangbæk confirmed the artist's most recent order was rejected on "political grounds".

"Any individual person can naturally purchase or get access to Lego bricks in other ways to create their Lego projects if they desire to do so, but as a company, we choose to refrain from engaging in these activities – through for example bulk purchase," Trangbæk told the paper.

"In cases where we receive requests for donations or support for projects – such as the possibility of purchasing Lego bricks in large quantities – where we are made aware that there is a political context, we therefore kindly decline support," he added.

Since sharing his story on social media, Ai has received offers from people around the world willing to donate bricks, with recent images on the artist's Instagram appearing to show him opening a bag of blocks he'd been sent.

A follow-up statement on the artist's Instagram, also posted on the 25th October, read: "Ai Weiwei has now decided to make a new work to defend freedom of speech and 'political art'. Ai Weiwei Studio will announce the project description and Lego collection points in different cities. This is the first phase of the coming projects."