The firm designed Casa Dem for one of its three directors, Jérôme de Meuron, his wife Paola and their seven-year-old child.

It is set into a steep slope beside the architects' studio in Caviano – a region on the eastern shoreline of Lake Maggiore.

Two of the building's three storeys sit below street level. When approached from the road, the house appears to be just one storey tall, but from the valley below its tall narrow form is revealed. 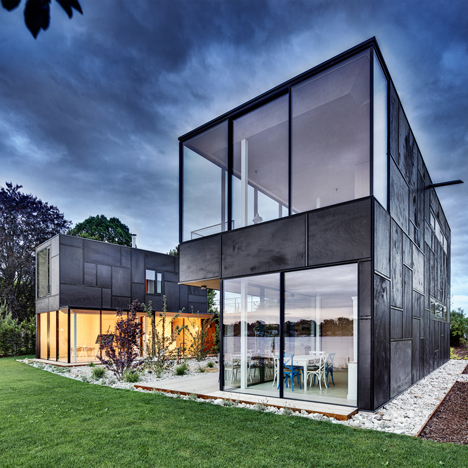 "The polygonal exterior shape and the steep topography of the site let the building appear as an archaic stone block in middle of the forest," said the studio.

"This is reinforced by the rough washed concrete surfaces becoming darker by the weathering," said Wespi, de Meuron and Romeo.

"To the mountain-sided street, the construction presents itself as a closed, simple one-storey volume," they added. "To the valley side, the house appears as a narrow three-storey tower."

The building has an irregular pentagonal form that was dictated by planning restrictions, which stated minimum distances from a nearby forest, road and neighbouring property.

"The building laws determined the outer form of the building, what often happens when leftover plots are developed," explained the architects.

Living areas are largely arranged within a rectangular portion of the plan, while courtyards and loggias are dotted around the perimeter.

The top floor of the house is used as the primary living area. The rough concrete walls of the room are decorated with paintings and sculptures by Jérôme de Meuron and Hanspeter Wespi.

The living space connects directly with the street via a flagstone courtyard, which features a small seating area built into the wall. Cutaways in the outer wall offer residents views of the surrounding vegetation.

A second courtyard on the other side of the living space faces onto the back of the property.

"The inner courtyard on the seaside releases the view to the lake and the mountains through a big roofed opening; while its closed wall surfaces reflect the sunlight to the inside," said the architects.

"Both courtyards, each with a wisteria, let the living room become a garden room and let the inhabitants experience the varying atmospheres of the weather and the light in an unusual intense way."

A skylight is situated above the chunky concrete staircase that connects the three floors, allowing light to penetrate to the lower level.

The first floor, entirely hidden from the street, faces out towards the forest and lake. Here, two bedrooms are ventilated by angular loggias, while a cellar and workshop are located in the base of the structure.

Photography is by Hannes Henz.