The hand was created as part of Scharff's Soft Robotics research project – which focuses on the ways robots can be integrated with more tactile materials, and so improve robot-human interactions.

"Robots are becoming omnipresent in our lives," Scharff told Dezeen. "This makes it very interesting and important to think about robotics from a design perspective."

"Currently, most robots are relatively rigid machines which make unnatural movements. Soft robotics – the application of soft materials in robotics – provides a different perspective to interacting with robots," he added.

Scharff referenced natural biological systems to design the hand, including human muscles and the structure of an elephant's trunk.

The palm of the hand contains integrated air chambers, which work like bellows, and respond to the pressure applied when held by a human hand. 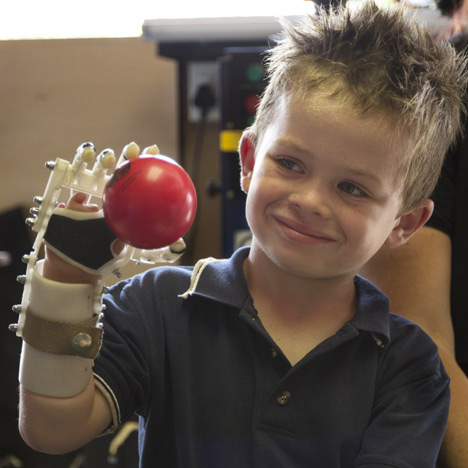 Squeezing the robotic limb, in a handshake for example, results in an increase in air pressure in the chambers, which causes the fingers to grip more or less, depending on how firm the original handshake was.

"This shaking of hands is used as a metaphor to show how the technology can be used to improve human-robot interaction," said Scharff.

"The technology can be applied in for example orthotics, prosthetics, care robots, exploratory robots and industrial grippers."

The fingers and thumb of the hand can also be separately controlled, using pneumatics, and the wrist can rotate in both directions.

The hand was printed as a single piece using selective laser sintering (SLS) – a printing method that melts powder using a laser to form the shape of a product – using a flexible material similar to polyurethane.

Although currently still a prototype, Scharff is continuing to develop the technology for use in 3D-printed custom-fit gloves, which could help people learn to grip objects again.

The hand was on show as part of the Mind The Step exhibition in Eindhoven's Klokgebouw building for Dutch Design Week 2015, which runs from 17 to 25 October.

The 2015 James Dyson UK Award was given to startup Open Bionics' robot hand, which was similarly 3D-printed, and designed as a low-cost alternative to current prosthetics.