Designed as a resting place for festival-goers or visitors to events, the To Many Place tents offer single or double rooms that can be assembled inside disused buildings.

Polkamp created the concept to serve a double purpose – to raise awareness of empty buildings, and provide an alternative to traditional hotel accommodation.

"The idea for a travelling hotel originated when I was in Slovenia last year," Polkamp told Dezeen. "There I slept in a hotel that was located in a beautiful anti-squat building, but the owner told me he had to stop the hotel because he could no longer make use of this location."

"Then the idea for a hotel that travels from one spot to the other popped up in my mind. Because you don't have to stay in one city with your hotel, you can re-use empty buildings and give them a new purpose instead of having them empty," she added.

The hotel has been designed to easily connect with existing cultural events, and the tents have been created in neutral colours to match different environments.

The side of each tent features a large room number, and the entire tent frame and material can be packed down to fit into boxes that are used to form the base of the bed. These can also double as luggage storage space when the room is in use. 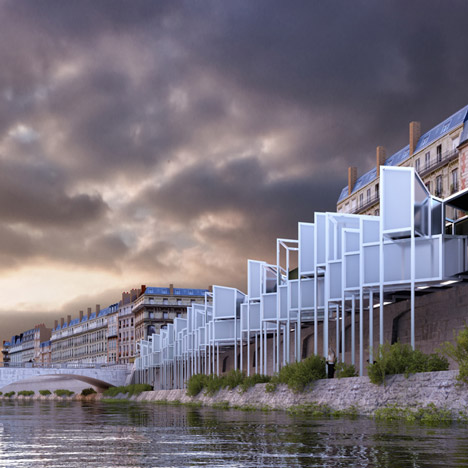 The tents are designed to be accompanied by communal kitchens that would aim to replicate the social aspect of camping. Each guest would have their own storage drawer, which would also contain a recipe card to contribute to a group meal.

Polkamp also intends to organise activities around the places the tents are located in, involving local initiatives and caterers to set up events such as outdoor cinemas or concerts.

"Camping in the middle of the city without having to bring your own tent, able to use the building as your own living environment but also sharing spaces with other guest, that is one unique experience," she said.

The designer is currently raising money through Dutch crowdfunding site Crowdabout to construct six further tents. She intends to develop temporary structures that can house larger numbers of people, as well as rooftop tents.

Polmkamp's project was displayed at the Design Academy Eindhoven graduate exhibition, which took place during Dutch Design Week from 17 to 25 October 2015.

Other graduate work on show included Bastiaan de Nennie's surreal digital creations created with 3D scanning, and Vera de Pont's Pop Up collection of garments that can be cut out and assembled as one piece by the wearer.