Chicago City Council members have voted in favour of MAD Architects' controversial design for the George Lucas Museum of Narrative Art on the shore of Lake Michigan.

MAD's proposal for the museum, which will host the private art and memorabilia collection of film director George Lucas, is expected to cost $400 million (£260 million) and features a white tent-like structure with two peaks and a new public space around its base.

A viewing platform on the taller of the two peaks will be topped with a halo-like shelter, while cut-away ovals around the bottom will be glazed and provide entrances into the building. Inside, the building will include galleries, screening rooms, and a restaurant with 360-degree views at the top.

Local firm Studio Gang, led by architect Jeanne Gang, is also involved in the project and will design a bridge to connect the site to the nearby Northerly Island peninsula. New York-based firm SCAPE is the landscape architect. 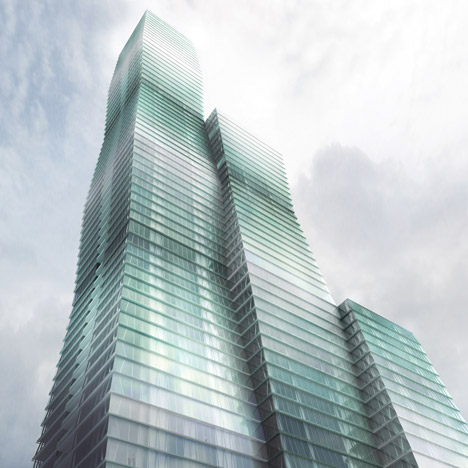 The project was approved by a majority vote during a Chicago City Council meeting yesterday. It is now expected to begin construction next year, with a completion date of 2019.

The original concept designs for the museum were unveiled in November 2014, but quickly attracted controversy due to the building's location, south of the Soldier Field stadium on a lakeside site currently occupied by carparks.

Last year a local parks protection group launched proceedings against the city, claiming that it could not give the lakeside site to a private organisation – the case is ongoing with the next court hearing due on 10 November 2015.

In September, the architects unveiled a revised design, with a footprint that had been cut by 40 per cent. The total square footage was reduced by 25 per cent to 300,000 square feet (27,870 square metres), and an extra 4.5 acres (1.82 hectares) of open space was added to include a series of dunes with a filigree of paths and trails running through it.

The new design also included additional windows for views out to the city, Lake Michigan, and surrounding parks. The smooth exterior cladding depicted in images of the design has yet to be specified, but is expected to be stone or concrete.

Architect Frank Gehry and Chicago mayor Rahm Emmanuel have both voiced strong support for the project.

"We have a museum and all the cultural and economic enrichment that comes with it," Emanuel told journalists after the city council meeting where the scheme was approved.

Lucas, whose oeuvre includes the Star Wars and Indiana Jones movies, had previously considered locating the museum in either San Francisco or Los Angeles, close to his California home and the base of his company LucasFilm. He selected Chicago in June 2014 – the director has previously described the city as a "second home". His wife, Mellody Hobson, is from Chicago and they married in the city.

The term "narrative art" refers to figurative imagery and storytelling, and Lucas' collection is thought to include Norman Rockwell paintings, digital art, and costumes and objects from films – including a scale model of the Millennium Falcon, the spacecraft piloted by Han Solo in the original Star Wars films.