British studio Haworth Tompkins has completed its third building for the Royal College of Art's campus in London's Battersea – an industrial-style facility for ceramics, glass and metal-work students (+ slideshow).

Designed by studio founders Graham Haworth and Steve Tompkins, the Woo Building joins the firm's Dyson and Sackler Buildings, as well as the earlier Sculpture Building, to make up the RCA's Battersea campus.

The London-based firm, which was awarded the Stirling Prize in 2014 for its overhaul of the Everyman Theatre in Liverpool, has spent seven years on the project to create "world class facilities" for students.

Collectively, the four buildings group the school's fine art courses in a single site for the first time in the institution's history.

Like its neighbours, the building features a saw-tooth roof and corrugated metal siding that gives the facility an industrial aesthetic. A passageway connects the Woo Building with the Dyson Building, which houses photography and print-making students.

"As with the other buildings, we wanted the Woo to promote collaboration across disciplines, enabled by the flow and shape of the design," said Graham Haworth. 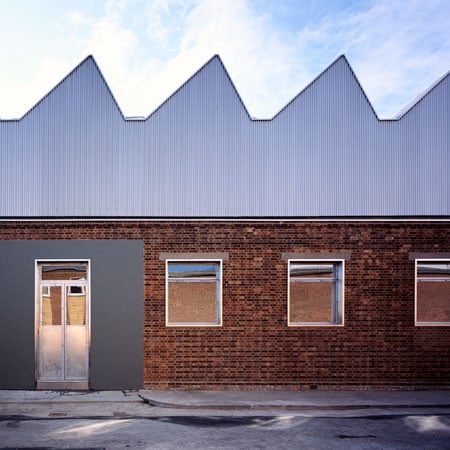 The Sackler Building by Haworth Tompkins

"The Woo Building is the third phase of development at the RCA's Battersea campus and was designed simultaneously with the Dyson Building, sharing and extending a central machine hall in the centre of the block."

Studios and facilities for jewellery and metalwork students are housed on the top two floors of the building. These feature high ceilings, and are lit by skylights and windows with views over London's skyline.

The school's ceramics laboratory and kiln room are located on the lower floor, alongside a glass furnace workshop – which is surrounded by glass doors that allow students to step outside and escape from the heat.

"The Woo Building mirrors the factory-inspired Dyson, with a triple-height, glazed central hall accommodating specialist equipment alongside spacious workshops, while studios, offices and common spaces are housed on the three floors above," said the RCA in a statement.

The building is designed to offer "cross-pollination" between courses, with students at the Woo Building able to access facilities in the Sculpture Building, including a metal foundry.

"The flow and shape of the building allows the cross-disciplinary interactions and connections across the disciplines that are central to what makes RCA education so transformational for students and researchers," said the design team.

A pair of anodised aluminium gates at the building's Howie Street entrance were designed in collaboration with London designer Max Lamb and the school's Design Products alumnus.

"Haworth Tompkins have created a remarkable space that not only incorporates practically designed state-of-the-art studios and workshops, but also fosters the kinds of connections and collaborations across disciplines that make life at the RCA so rich and rewarding," said RCA rector Paul Thompson.

"The addition of the Woo Building to our estate enables us to continue to provide the space and facilities that will attract the very best graduate artists and designers to study with us."

The school has recently been in the news, after it suspended its Design Interactions course at an estimated cost of £300,000. The course closure was blamed on the departure of key members of the school's teaching staff.

Haworth Tompkins, which was founded in 1991, also recently completed a £80 million refurbishment of Denys Lasdun's National Theatre. The project follows on from the firm's overhaul of another Brutalist theatre – the Chichester Festival Theatre by Powell & Moya.

More news about the Royal College of Art