The actress arrived at New York's Metropolitan Museum of Art for the gala wearing a full-length grey dress with puffed sleeves modelled on the blue ballgown worn by Cinderella in the Disney cartoon, accompanied by her stylist Law Roach.

At the entrance to the event, Roach waved a smoke-emitting wand and the dress slowly transformed from bottom to top, from a grey colour to a glowing pale blue shade.

Tommy Hilfiger described the dress as "an animatronic crystal-grey silk evening gown constructed to enable both visual and physical transformations of the silhouette from understated to dramatic". It said that the outfit "culminated with the gown evolving to the colour blue for its final look".

Zendaya posted a series of images on Instagram that showed dress fittings, and gave a glimpse of the wiring and technology hidden beneath the bustle of the gown, which was responsible for the transformation.

The accompanying caption drew attention to the behind-the-scenes work: "Underneath the magic. Thank you to all the very very smart people who somehow built and made this dress work."

Roach also posted an image on Instagram of the pair arriving at the event.

Our 1st Met together.... thank you to the amazing @tommyhilfiger team, @lancomeofficial for providing my grooming and @jacobandco for making my nite so special. Cinderella and her FAIRY GODBROTHER

No details have currently been released explaining the technology used to make the colour change possible. It could have worked in a similar way to Intimacy – a collection of dresses by Studio Roosegaarde that change from opaque to transparent, through the use of electrically sensitive foils.

According to Vogue magazine, the dress was partly inspired by fashion designer Hussein Chalayan's Spring 2007 collection.

The closing look of Chalayan's show was a robotic dress that peeled back its layers, leaving the model naked. Another dress in the tech-inspired futurist show had a skirt made from a series of overlapping panels that mechanically lifted on robotic arms.

"We hunted down the people who created the technology used in the Chalayan show and who did all the mechanics to create those garments, then brought them to Tommy to collaborate with us on this," said Roach to Vogue.

"It has to be literal enough so that people get it," the stylist said. "When you see Cinderella, you know right away it's her; the baby blue dress and the hair and the French twist it all works together." 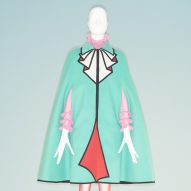 To complete the look, Zendaya carried a small bag in the shape of the pumpkin coach from Disney's 1950 animation of Cinderella, her hair was styled in a similar style as the character in the film, and she wore clear high-heeled pumps, in a nod to the glass slipper.

The outfit was designed in response to the theme of this year's event and exhibition, Camp: Notes on Fashion. The 2019 show refers to the name of a 1964 essay by American writer Susan Sontag, Notes on Camp.

The Met Gala announces the opening of the major fashion exhibition on the same theme, at the museum's Costume Institute.