New York studio Young Projects has completed a warming hut for a housing development in Alberta that consists of a fireplace set within a slatted wooden box (+ slideshow).

Called Carraig Ridge Fireplace, the shelter is located within the foothills of southern Alberta, a western province in Canada.

The structure is near the city of Calgary and Banff National Park, and offers panoramic views of the Rocky Mountains in the distance.

The building is perched on the bank of Anna Lake, which sits at the heart of a 650-acre (263-hectare) property that will ultimately contain 44 contemporary country homes.

The shelter – which is similar to warming huts built for ice skaters and cross-country skiers in snowy regions – will serve as an amenity for residents. 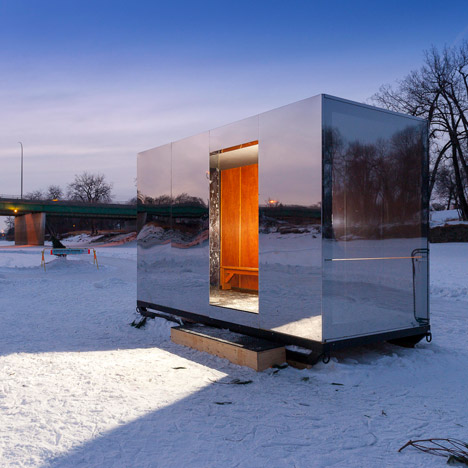 "The design amplifies the conventional fire pit to create an inhabitable fireplace that functions as a hearth to the lake and surrounding hills," said Young Projects.

"It is a subtle landmark within Carraig Ridge and a destination, acting as a beacon hovering above the lake."

The shelter "balances clarity of form and construction technique with richness of texture, and creates a transformation from landscape to enclosure with minimal intervention," added the firm.

The structure was designed within four weeks, requiring the architects to develop a straightforward method of construction using materials that were readily available.

It is made from heavy timber boards, cut into lengths of three to five feet (one to 1.5 metres). The boards are stacked in six different positions based on "simple rules of rotation," said the firm.

"The positioning of each timber is a playful interpretation of stacking firewood and references traditional log cabins, with exaggerated intricacy and surface texture," said the firm.

"This piling method creates a porous, thick exterior that holds the warmth of the fire but allows light to slip through to the outside, providing users with moments of oblique views back to the landscape," the firm added.

The structure's "prismatic form" is softened by the texture of the raw wood, along with end caps made of polished metal.

The fireplace itself is constructed of metal and is powered by a gas burner, so no sparks are generated. "The timber structure has several feet clearance from the flames," said the firm.

The warming shelter is the first of three amenity structures planned for the site – the others being a treehouse and a picnic house.

Based in New York, Young Projects was founded in 2010 by Bryan Young. The studio produces a range of work, from buildings to art installations and custom furniture.

Other examples of warming shelters include a series of huts designed for a frozen river in Winnipeg, Canada, and a structure that resembles a giant pompom by Canadian firm RAW Design.

Photography is by Brett Bilon and Dan Kingston.