Studio Job has teamed up with Italian brand Bisazza to produce a collection of mosaic tiles with spooky graphics that depict bones and animal skeletons, just in time for Halloween.

The Perished tile designs were created by the Belgian artists for Bisazza, using motifs previously applied to wallpaper and a variety of furniture pieces.

Small squares in two contrasting colours are used to create the shapes of different skeletons.

Skeletal animals including monkeys, crocodiles, seahorses, turtles and tropical birds are laid out to create a symmetrical pattern that forms a repeat.

Individual bones are displayed end to end, acting as borders along the top and bottom of the image. 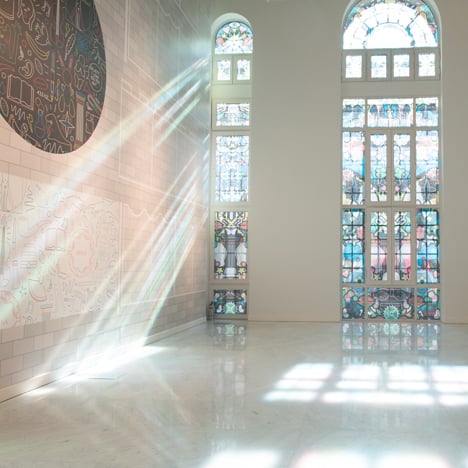 "We wanted to create a collection that is exclusive due to the quality of the materials and techniques," said Studio Job, which also recently created the set design for musician Mika's tour.

"Through the skeletons, violent and innocent, their direct graphic forms depict our times which are extravagant and violent," added the studio.

The mosaics are available in two combinations: black and white, and rose gold and brown.

Studio Job is a partnership between Job Smeets and Nynke Tynagel, who symbolised their romantic break-up as a head-on collision between two steam trains earlier this year.

The artists have an ongoing relationship with Bisazza. The brand presented their designs alongside work by Spanish designer Jaime Hayón during Milan design week in 2007.

More recent projects by the duo include a series of lamps shaped like peeled bananas and a giant crystal-encrusted model for the Swarovski theme park.