Architecture studio Vokes and Peters has created a new timber-panelled interior for a heritage property in Queensland, Australia, and built a new cottage-like extension at the rear (+ slideshow).

The clients' aim was to make enough space to accommodate themselves and their children, without compromising the building's original character. It was this that led them to Vokes and Peters.

"Our clients came to us having observed our interest in celebrating the vernacular Queenslander timber house," said the firm, which also recently completed a blackened timber extension to a seaside residence.

"Over the life of our practice we have measured and drawn more than 100 of these buildings and have attempted to use this research to develop a material and detail language that is sympathetic to the aesthetic sensibilities of the period, as well as complimentary to the craft skill of the Georgian carpenters who constructed the buildings," they said.

The architects adapted the layout of the existing building, leaving most of the rooms intact but punching new holes through the walls to make it feel more open.

A new kitchen was added in one corner, while a bedroom block was built a little way behind.

The space between the new and old structures functions as a secluded terrace for the family, raised up above the level of the garden behind to protect it from flooding.

"For a young family on a relatively dense (by Brisbane standards) inner city site, it was critical that direct, informal access be provided to the garden," said Vokes and Peters. "We see the provision of open space and the amenity it brings as a critical feature of the traditional Brisbane suburb." 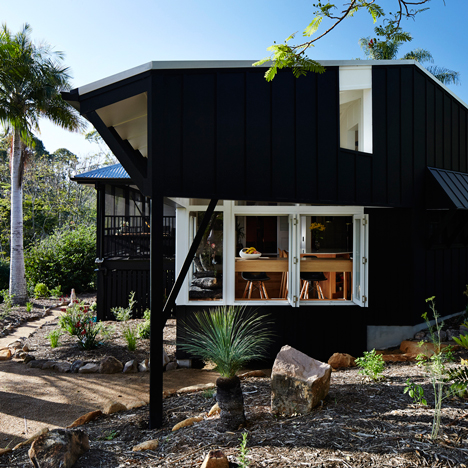 "The terrace provides a secure outdoor play space close to the living levels of the house," it added.

The existing house features a monochrome facade with an elevated veranda and a low-rise pitched roof.

The extension shares many of its characteristics, but with subtle differences. For instance, the wooden cladding boards are oriented horizontally rather than vertically, and the walls are mostly black rather than white. It also has a steeper roof pitch and sits on a brick base.

It contains two children's bedrooms, as well as bathroom facilities that are divided up into different spaces. "Separating these functions allows independent use, avoiding morning traffic jams," said the architects.

In the main house, the kitchen, dining room and small living room form a line along one side, leading directly through to the brick terrace behind. A larger living room and master bedroom are located on the opposite side.

"The public rooms have been deliberately located in the existing cottage to ensure that the bulk of the social activity occurs within these memorable spaces, but also to ensure that the cottage continues to encourage the occupants to engage the street, and by extension, their local community," said the architects.

The Queenslander style – characterised by its low-rise timber form and veranda entrance – has also inspired a project outside of Australia. It was recently adopted by a house in Japan by Tato Architects.

Photography is by Alicia Taylor and Christopher Frederick Jones.