Giles Pike Architects chose concrete and steel for the renovation and extension of this east London house, referencing the brick building's industrial heritage.

The initial plan was to demolish the Victorian workshop on Sewdley Street, Hackney, to make way for a new house.

But the client instead opted for a solution that would utilise the existing shell and therefore maintain the building's character.

During the original conversion the previous owners had divided the ground floor into a series of dark bedrooms.

Giles Pike's team repurposed this level by removing several of the walls, creating an open kitchen, living and dining area.

The previous entrance hall incorporated a winder staircase squeezed into one corner that ascended to the reception area and kitchen on the first floor.

This staircase was replaced by a straight set of stairs leading to a new lounge area, study and library.

The removal of several internal walls to open up both the ground and first floors necessitated new structural frames to be introduced, which are visible on both levels.

The other main addition to the interior is a three-storey concrete wall that was cast in-situ. It connects the main part of the building with a newer section added at the front in 2008. 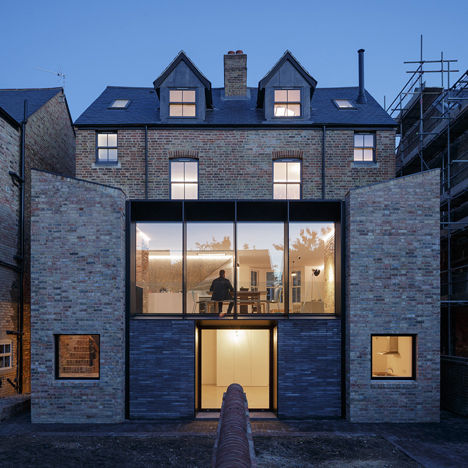 The angled concrete wall extends from the entrance to the main communal area at the centre of the house and seals off a corner of a bedroom tucked away behind it.

"The concrete wall provides a physical and visual link through the building both horizontally and vertically," said architects Matt Giles and Tom Pike.

"From drawing a diagonal line on a floor plan, the wall has become both a structural and visual element and is the driving force of the scheme."

A steel staircase with open timber treads is positioned in front of the wall, which extends through the first-floor reception space to a new bedroom level added at the top of the building.

Next to the entrance, a glazed corner surrounds a small courtyard shielded from the street by a brick wall.

Full-height glazed sliding doors allow natural light to reach the interior and enable the space to be opened to the outside.

The ground floor level was lowered so the new concrete slab extends straight out onto a patio area at the rear.

The architects left the front facade predominantly intact and painted the exterior of the first floor dark grey to create a sense of continuity with the zinc cladding applied to the new top storey.

Original brickwork is retained and left visible throughout the interior, where it combines with steel, concrete and reclaimed oak in a palette that references the house's industrial heritage.

"The result is a high quality contemporary home with a strong sense of the past," the architects added. "New elements preserve and enhance the original building and enable current building standards to be achieved."

Similar projects in the British capital include an oxidised steel extension added behind the brick wall of a Victorian house and a sunken glass-walled addition to another 19th-century property.

Photography is by Logan MacDougall Pope.