London firm Jump Studios has renovated a 19th-century battery factory in Madrid to create the sixth Google Campus – a co-working space for entrepreneurs and start-up companies.

Jump Studios designed the first Google Campus London in 2012, and were asked to create a similar space in the Spanish capital city that would support 7,000 members and 50 resident start-up companies.

"The consideration Google has for its Campus members needed to be mirrored in an environment that enables and fosters effective communication with clients and co-workers in both physical and virtual formats," said Jump Studios associate Michelle Nicholls. "No two start-ups are the same and this is acknowledged in our design by the creation of a variety of formal and informal spaces."

The studio was asked to completely overhaul an industrial brick building, which originally served as a battery factory. The first commercially-viable batteries were invented and refined during the first half of the 19th century, and were the main source of electricity until the arrival of the electrical grid allowed for more efficient distribution of power.

The studio installed a new entrance on the south side of the five-storey building to increase circulation space and allow access to an outdoor public plaza.

Visitors enter the building through the campus café, where lounge seating and black-tiled booths are set over two floors. Lights encased within a red steel cage hang above a seven-metre-long meeting table. 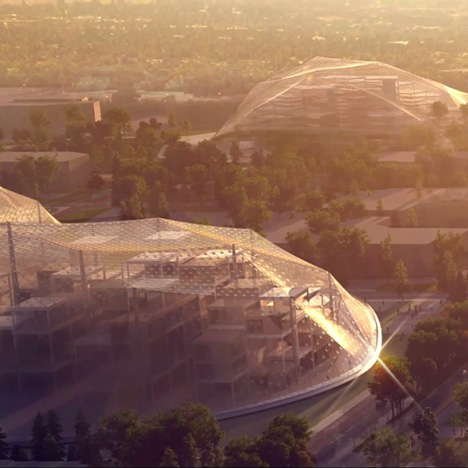 Robots will be used to construct BIG and Heatherwick's Google HQ

A triple-height auditorium situated on the north side of the campus has the capacity to seat 200 people for large presentations. A curtain can be drawn across the length of the room to create a smaller space for more intimate meetings.

Large west-facing windows allow natural light to flood the space, and original steel ceiling beams have been left in place to give a nod to the building's previous industrial purpose.

"Our design delivers a juxtaposition between the old and the new," said Nicholls. "History merges with a contemporary style to present a unique environment for Google's members."

Meeting rooms across the the second and third floors of Campus Madrid have each been decorated in a colour palette inspired by famous Spanish painters including Picasso and Joaquín Sorolla y Bastida.

Campus Madrid is the sixth addition to Google's community hubs initiative that aims to bring together startup companies and entrepreneurs.

Before merging with architecture and design practice Populous in June 2015, the London-based firm designed the interior for a Soho juice bar and created an office space for communications group Engine.