Dutch Design Week 2015: Design Academy Eindhoven graduate Bastiaan Buijs has designed a sex toy with a bright pink torso that can be mounted like a vaulting horse.

The designer wanted to combat the image of "a sad lonely man with a blow-up doll", by creating an object that users would be happy to openly display in their homes. 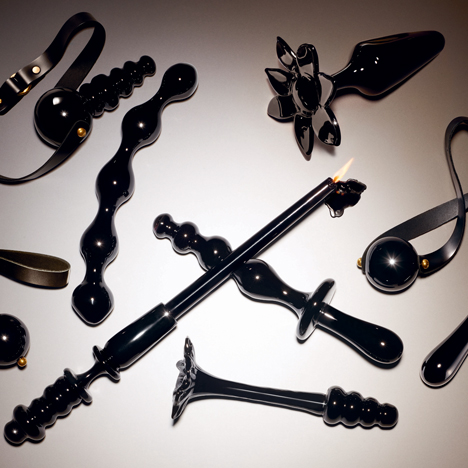 "I tried to change the idea and show the beauty of it," he told Dezeen. "It can be something beautiful, something we don't have to be ashamed of. It's something we all do, and many times enjoy. This is not something sad but something nice. So why put it away? Let's show it."

The Satyr features a bright pink solid torso made from medical grade silicon, which Buijs sculpted by hand from clay before putting into production.

The toy requires the use of the "whole body", and rests on four splayed maple wood legs – in the style of a traditional vaulting horse found in a gym. Its name refers to the horse-like creatures from Greek mythology, which were notoriously mischievous.

Buijs' product is designed to be used like a fleshlight: a male sex toy shaped to mimic the feeling of penetrative sex when the penis is inserted into its silicone form.

A hole in the base of the Satyr similarly contains a silicone cylinder, that can be removed for cleaning, and a 12-volt battery and motor that causes the body to vibrate when in use.

"I had the urge to create a new feeling, a new look and a new starting point," the designer said. "A sex toy for men that is completely different from the sex toys as we know."

"Lust is as normal as feeling hungry or thirsty, and the attributes people use to indulge it need not be hidden away," he commented.

The Satyr was shown at Design Academy Eindhoven as part of Dutch Design Week 2015, which ran from 17 to 25 October.