The industrial harbour of Swedish city Gothenburg is the setting for this sauna by Raumlabor, which features a rusty steel exterior and a warm timber-lined interior (+ slideshow).

Berlin-based Raumlabor worked with a team of local residents to build the Gothenburg Public Sauna, which is raised up over the water in the city's Frihamnen port, and accessed via a wooden bridge.

It features a rough-and-ready exterior of corrugated steel, an interior lined with thin larch strips, and a shower room surrounded by walls made up of glass bottles.

The building forms part of a wider regeneration of Frihamnen, which is being transformed into a public park ahead of the city's 400th anniversary in 2021. 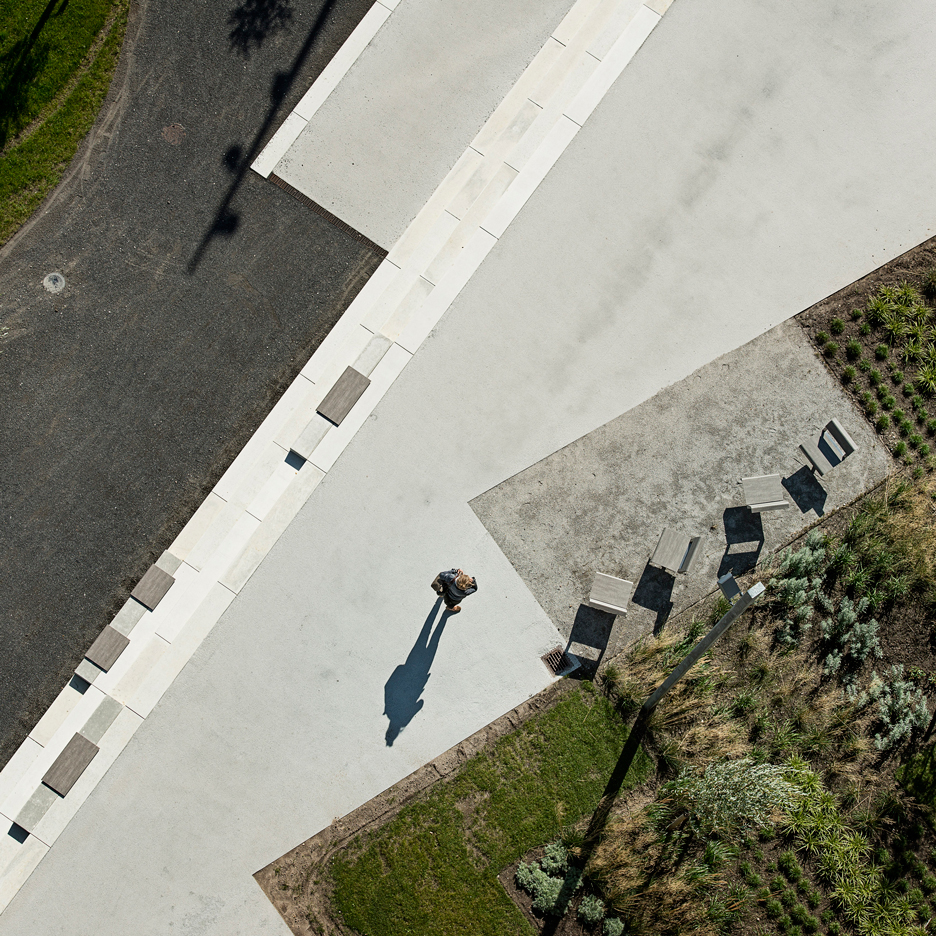 Raumlabor's aim was to create a place that can bring together all of the area's current occupants, from gardeners and rollerskaters, to joggers, dogwalkers, racing drivers, and couples that come to watch the sunset.

"Frihamnen is gradually losing its industrial character and is steadily becoming a new, central part of Gothenburg, open to be discovered and adopted by the citizens," said Francesco Apuzzo and Jan Liesegang, two of the 10 architects that comprise Raumlabor.

"Public baths were once an intense place for social gatherings in our cities," they explained. "They were places not only for relaxation and sport but also for politics, discussion, business deals, eroticism, hedonism and crime. This has been lost in our cities and substituted with the more bleak and leisure-based public swimming pools and spas."

"Since water pollution does not allow, for the moment, direct bathing activities in the docks, the establishment of bathing culture activities will generate a form of prediction for the future of this particular setting," they added.

The studio worked with a team of 24 city residents to build the structure on top of concrete piles. Weathered steel was chosen for the exterior to give the building an industrial aesthetic, helping it to fit in with its surroundings.

Inside, larch shingles create texture across the curved and angular surfaces of the ceiling and walls.

"The direction of the shingles' pattern on the walls and ceiling creates at the same time an embracing space and a focus on the view out of the big window towards the silhouette of the cranes and the city centre," said the architects.

The shower room stands on the opposite end of the bridge. The wine bottles embedded in the walls create similar lighting effects as glass blocks.

There is also small entrance pavilion built from recycled windows, and a granite plaza leading down to a swimming pool submerged in the water.

Raumlabor has a history of working on structures aimed at the public. Other examples include a public pavilion with green walls in Montreal and a mobile inflatable pavilion in New York.

Other recently completed saunas include a cavernous wooden grotto in Canada and a concrete tower in Germany.

Photography is by Raumlabor.