London-based designer Peter Marigold is launching a remouldable bioplastic card that can be used to make new tools and modify or repair broken objects (+ movie).

The credit card-shaped piece of plastic softens in a cup of hot water, allowing it to be moulded into new forms, or used to repair objects.

The starch-based material adheres to other plastics when warm, so can be used to fix broken plastic toys or other items.

"It's strong enough to make a basic wrench in an emergency," said Marigold, who has been experimenting with thermoplastics for the last two years. 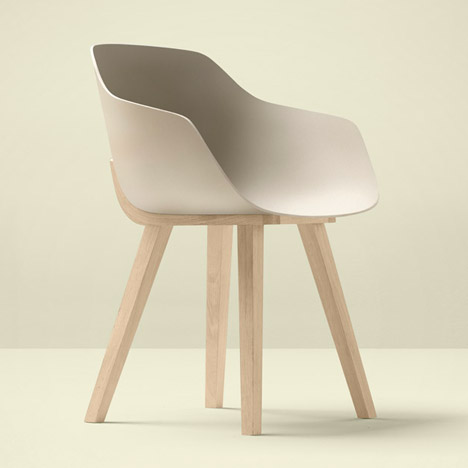 "It's great for making things like little hooks in your hotel that are always missing," he told Dezeen.

"Making temporary baby corners on tables is a good one, and you can fix plastic shovels. It always depresses me when I go to kids' sandpits and see broken discarded shovels dumped," he added.

"In Coram's Fields [park] in London I started fixing them in the cafe next to the sandpit and then putting them back where I found them."

FORMcard can be re-used by immersing it into hot water to soften again, and according to Marigold is as strong as nylon.

The designer worked closely with the moulders, colourant suppliers and chemical company that produces the plastic to create a product that would be completely food-safe and biodegradable yet still bright coloured.

This meant using powder pigments instead of universal pigments, which contain styrenes, hazardous chemicals that are common in many plastic products.

The plastic FORMcard is made of is usually supplied in granulated form, which has restricted its everyday use. Marigold hopes that providing it in a convenient card shape will encourage more people to experiment with it.

"We believe that this material has a place in everyone's kitchen drawer, tool box and back pack, like Blu-tack or Selotape, so we developed it into a flat card form, that would always be around and always be ready to use," said Marigold, who is better known for his furniture design.

"I have a great love of the irregularities in life. I like things with character, narrative, the moment at which material takes on life," he said.

"I also have a very strong belief in the creative potential in every person on the planet, but this tends to get held back by our belief that products and objects are things that we buy, not make," he added. "I hope that FORMcard is a small gesture in changing that perspective."

"I hope that FORMcard is a small gesture in changing that perspective," he added.

The material is similar to mouldable rubber glue Sugru, which can also be shaped to fix, strengthen or customise any object, before being left to cure and set.

FORMcard launched on Kickstarter today, and is seeking £3,500 of funding to be put into production.