AMBS Architects has proposed a 1,152-metre-tall skyscraper for Iraq's Basra Province, which would surpass Jeddah's Kingdom Tower and Dubai's Burj Khalifa to become the tallest building in the world (+ slideshow).

Composed of four conjoined towers, The Bride tower's 230 storeys would be topped by an 188-metre-tall antenna.

This would make the structure 152 metres higher than the planned height of the Kingdom Tower, designed by Adrian Smith + Gordon Gill Architecture and currently under construction in the Saudi Arabian city.

The world's tallest building title is currently held by Dubai's 830-metre Burj Khalifa skyscraper, also designed by Smith and Gill while working at US firm SOM.

AMBS Architects' Bride tower would be surrounded by a glazed canopy on its south facade, referred to as a "veil" and designed to offer shade to the complex's low-rise buildings and public areas. 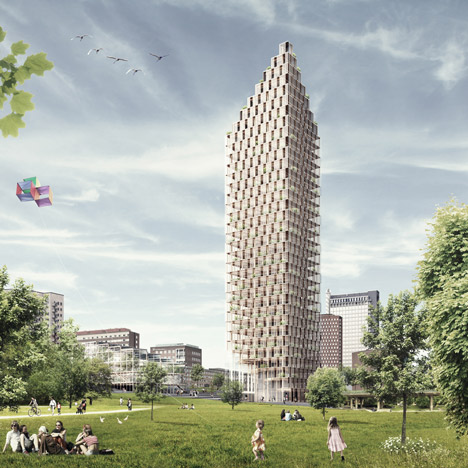 The structure's three other towers would measure 724 metres, 484 metres and 61 metres respectively.

Basra is located in the south of Iraq, and is a rapidly growing business centre. The building takes its name from the local area: the Bride of the Gulf.

AMBS Architects has offices in London and Baghdad, and is also behind the design of the first public library to be built in Iraq since the 1970s. 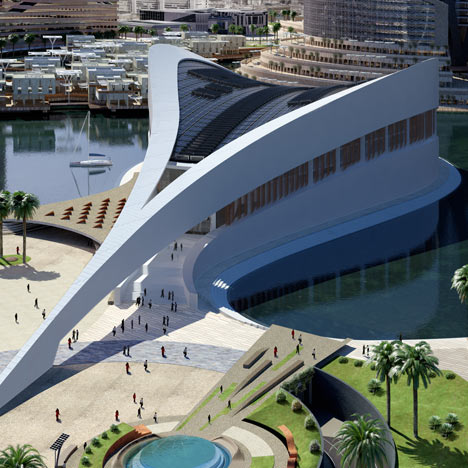 The firm described its skyscraper as "the first vertical city in the world", saying it will not only be the tallest structure but will break new ground in engineering and vertical transportation.

The Bride is designed to house offices, hotels, residential areas, commercial centres, parks and gardens, and even its own rail network across the 1,550,908 square metres of floor space.

"In contrast to a conventional tower, The Bride will be a place that may be enjoyed by all, not only for the ones that live and work there, but also the rest of the public," the firm said in a statement.

Breaking the 600-metre height mark, the tower would fall into the category of "mega tall". Towers over 300 metres are known as "super tall".

"Super-tall towers are perceived as an object in the distance," said AMBS. "An alien planted in the city, disconnected from the urban scale at ground level. The Bride, on the other hand, will be conceived as a city itself both vertically but also horizontally from the ground."

"It will be enjoyed by thousands of people in endless ways, within it, on it or under it," the firm added. "From walking in the vast shaded parks and promenades at ground level, to having lunch or shopping in a sky-square hundreds of metres above sea level."

The Bride is planned to be a net-zero structure – meaning it would produce as much energy as it consumes. No start date for construction has been set.

Architect Jeanne Gang is also set to break a "world's tallest" record for the highest building designed by a woman, while a building by Patrick Blanc and Jean Nouvel holds the title of world's tallest vertical garden.

Dubai has also planned a pair of rocket-shaped buildings it says will be the world's tallest twinned skyscrapers.