Arch Group's proposal was created for use by Russia's Ministry of Emergency Situations, also known as EMERCOM.

"The suggested system is designed to be the ideal solution for large situational and dispatch centres, working with a great volume of information – including map information – in emergency situations," said Arch Group.

The ministry is tasked with responding to natural disasters, managing search and rescue operations, and conducting submarine missions, among other duties.

"The main problem of these dispatch centres is that such a video wall does not properly display large maps that can be used by all in the room," said Arch Group, which has previously designed the interior of Moscow's electricity control room.

Its solution is a giant dome for displaying 360-degree maps. Rectangular images could also be overlaid to provide extra visual information about scenarios in specific locations.

Arch Group identified that fixed workspaces are not ideal for interacting with both the video wall and other team members.

"In this case, it is necessary to choose once and for all how many places are in the mode of a round table, and how many in the mode of individual work with video wall," said the studio. "Besides, many people in one hall during intensive work creates a lot of noise."

Individual mobile seating pods for each worker would feature transparent soundproof domed tops, which could be opened or closed by the user. 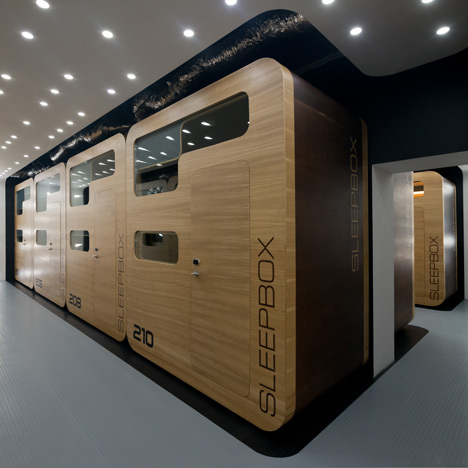 When in isolation mode, ventilation and air conditioning would create a climate-controlled environment for whoever is inside, while video conferencing would allow communication with other pods.

Armchairs equipped with microphones could recline so the user can view the maps on the room's curved ceiling.

Panoramic monitors that could retract behind the chairs and other communications tools would also be incorporated into the mobile workspaces. Each would link to a power supply via a series of connectors spread across the floor.

Arch Group has previously designed a booth for taking a quick nap in busy urban environments. First installed at an airport in Moscow, the Sleepboxes were then used to fill an old building in the city, turning it into a hotel.