Shanghai office Four O Nine has converted a glass building in Beijing into a cafe, adding walls of plants to purify polluted air.

Influenced by Cafe 27's organic menu, the team aimed to rework the existing structure into a "healthy" building lined with greenery and natural materials.

"The design was inspired by the client's choice of food for the cafe," architect Lukasz Kos told Dezeen. "All of the food is prepared on site in the cafe pastry kitchen, from healthy organic ingredients."

"We wanted to elevate that desire for healthy food with a healthy building, thus all of approaches we took were ecologically sensitive," he continued.

Plant-covered architecture is often used to improve air quality in polluted cities, as the vegetation absorbs carbon dioxide and produces oxygen. Recently, architect Stefano Boeri revealed designs for a plant-covered 36-storey tower in Lausanne, Switzerland, continuing the "vertical forest" concept he trialled with a pair of towers in Milan. 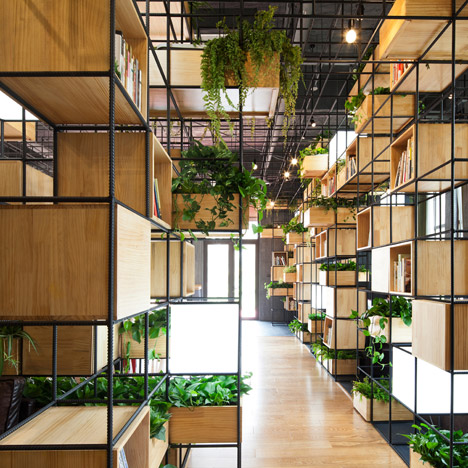 Cube-shaped wooden planters line the interior and exterior cafe walls. A hut-like elevation clad in ash batons divides the space in half, splitting up the dining area from the pastry kitchen and restrooms.

Ash batons are also are used to create a backdrop behind the white-tiled bar. For the flooring, terrazzo borders ceramic tiles that are used to define the seating area.

"The combination of the terrazzo flooring and ceramic bar creates a thermal mass that gradually and passively heats the space in the winter," explained Kos.

"The previous version of the greenhouse was a terrible and kitschy pavilion in what was a larger venue for weddings," said Kos. "We removed the existing pink classical facade of the main building and replaced it with charcoal concrete and Douglas fir panels."

The team also redesigned the surrounding landscape and added the exterior dining garden with bench seats to the front of the cafe.

Photography is by Hu Yihuai.