Japanese studios Sandwich and Team Low-Energy used three truckloads of timber to create the sculptural facade of this Tokyo house that also boasts a two-storey-high library and an indoor swing (+ slideshow).

Kyodo House is designed to be as sustainable as possible, both in its layout and in the materials chosen to build it.

For the facade, Sandwich and Team Low-Energy selected wooden offcuts. Drawing inspiration from the work of artist and Sandwich founder Kohei Nawa, the team chose to fix wooden lengths to the walls at an angle, creating a textured surface of varying tones and widths.

Architect Yuichi Kodai describes the result as "warm and rustic, but still contemporary". "The type, size, thickness and age of the timber used on the facade is at random," he told Dezeen.

"The most challenging parts were dividing the timbers according to the assembly rules, and physically constructing the facade whilst maintaining the continuity of the diagonal lines around the corner of volumes."

The architect hopes the project will encourage other architects to specify timber offcuts, which he believes will help support Japan's flagging timber industry. 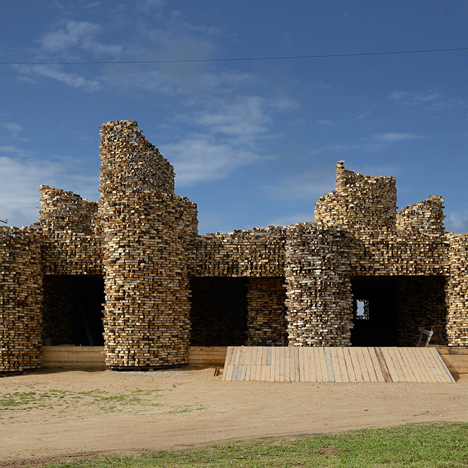 "The Japanese timber industry is weakening due to the cheap supply of timber from abroad and there are many lumber mills that carry unsold timber stocks," he said.

"These leftover timbers are very difficult to make profitable, as any kind of additional production process – such as making them into wood chip – costs more than the sale value."

Other architects have taken similar approaches to waste wood, with examples including a cafe in Australia and a pavilion in Russia.

The house's volume is made up of several "overlapping boxes", including one that juts out at an angle and one that stretches up to form a tower. These boxes dictate the internal layout of rooms.

The largest area in the house is an open-plan living room, including a dining table and kitchen. It occupies the majority of the ground floor, alongside bathrooms and storage areas.

The living room has a double-height space at its centre, where Sandwich has installed a large library wall and a central staircase. There is also a narrow ceiling void, where a swing for the children hangs down.

Three bedrooms are located on the level above, while the three-storey-high tower contains a study space and a tea room.

"The most efficient way to harvest solar energy is to place living spaces towards the south, and utility rooms to the north," explained Kodai. "The composition of stacked volumes above the ground floor was the result of a simulated airflow pattern."

"The teahouse holds the role of producing airflow through a chimney effect, while the juxtaposition of the other volumes was carefully adjusted according to views, sceneries and surrounding greeneries," he added.

A first-floor terrace offer residents an elevated view of the Setagaya neighbourhood, while an additional basement room provides a large space suited to various events.

Established in 2013, Sandwich is one of several studios set up by Nawa, which occupy a former sandwich factory in Kyoto. The artist's previous works include a huge foam installation.

Photography is by Nobutada Omote.