Hadid and Schumacher's team used computational design to create the pavilion, which is constructed from laser-cut and perforated steel surfaces, aluminium box sections and timber loops.

"Defined by digital processes, the pavilion has been developed in such a way that its components are, at most, singly curved," said the London-based practice. 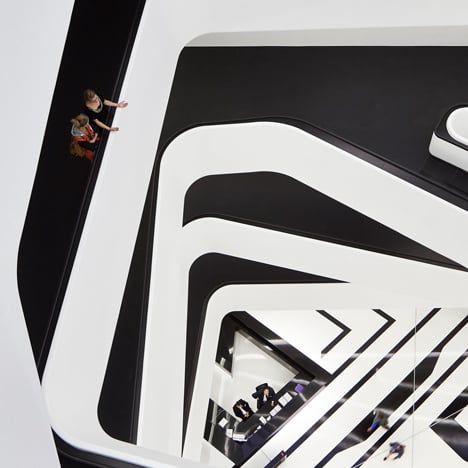 Volu appears to be made from a continuous piece, and features an oval roof that tilts downwards over diners like a mushroom cap. The skeleton of the 3.2-metre-tall structure houses cut-out irregularly shaped sections that form a pattern across the roof and the supporting stem.

The pattern is repeated in the floor of the 20-square-metre pavilion, although the gaps have been filled with wooden boards.

"Comprised of a series of structural bands collecting at the spine and expanding overhead, the patterning of the pavilion is guided by the varied structural loading conditions," said the practice in a statement.

"Through the analysis of the geometry under load, the pavilion's structure and skin have been digitally optimised to remove unnecessary material, resulting in the lightest possible design solution — following an organic structural logic that recreates many of the same principles found in nature."

The structure houses a circular wooden dining table, accompanied by three curved benches that can seat up to ten diners.

The piece has been commissioned by property developer Robbie Antonio for his ongoing Revolution project, which invites international architects and designers to create prefabricated living spaces.

Video showing the design and construction process of the Volu pavilion

Volu is installed inside the collector's lounge at this year's Design Miami fair, which is taking place from 2 to 6 December 2015. A sculptural table by Janne Kyttanen and loopy chairs by Aranda\Lasch are also on show at the event.

Hadid currently has a high-rise residential tower under construction in Miami, and was chosen by the City of Miami Beach to design a parking garage at Collins Park in 2011.