The Scale system relies on a hexagonal framework that is constructed from individual three-pronged thermoplastic sections. These join together to create a base for the covering fabric tiles, and rest on oval aluminium feet. 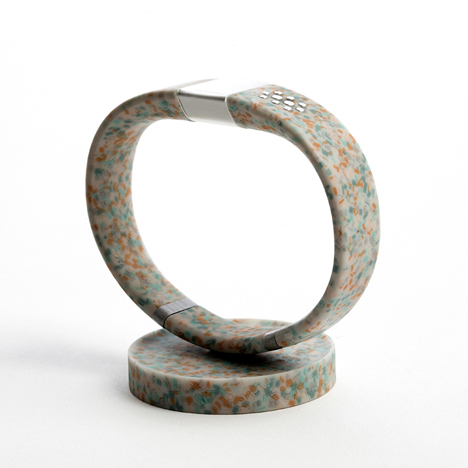 "After experimenting with a wide range of structural forms we arrived at the skeleton structure as it was the best balance between structural rigidity in plastic – selected for its lower cost than metal to keep the product price accessible – and visual appeal with a strong identity," Hubert told Dezeen.

Double-sided triangular pieces, made from recycled and pressed hemp, then clip to the framework using magnets that are placed at the corners of each tile.

"It is 100 per cent recycled and recyclable," said Hubert.

"It has a very light footprint and an open structure which increases the material surface area, enhancing the acoustic sound-absorbing properties of Scale."

Indentations in the material cause the pattern of the hexagonal structure to show through once the screen is constructed.

The 330-millimetre-tiles can be removed to create openings, and users can great gentle bends in the screen by adding curved framework pieces.

The entire Scale system can be assembled without tools, as the components clip together using a bolt system.

"Workplaces today are constantly in flux, with teams organically growing and shrinking as projects demand," said Hubert, who created similarly modular screens for the 2013 edition of 100% Design.

"Commercial interior spaces need to be able adapt to these demands and Scale for Woven Image delivers a solution to enable this with both flexibility and adaptability, whilst retaining a strong sense of visual engagement.

Using the modular framework, the Scale partition can be adapted for the needs of various spaces, and made larger or smaller as needed.

The company claims that by making the product so adaptable, its lifespan has been extended and its carbon footprint reduced.

Since rebranding his studio as Layer earlier this year, Hubert has redesigned the charity collection box and launched a concept wearable that could track personal carbon consumption.

More from Benjamin Hubert and Layer