A concrete wine cellar props up one end of this tall white house by Portuguese architect João Mendes Ribeiro, located on an estate that also features an olive grove and a vineyard (+ slideshow).

The concrete cellar levels the house on a gently sloping plain in the Fonte Boa area, which is ringed by the Jerumelo, Sicó and Espinhal mountains.

While the upper storeys of the building are covered in white render, its concrete base is left exposed – giving it the same two-tone effect used by Ribeiro for an art warehouse near his studio in Coimbra.

"Reinterpreting the traditional single family housing typology, the house is a two-storey rectangular volume with a zinc pitched roof, whose volume detaches itself from the slope with a concrete basement," he said. 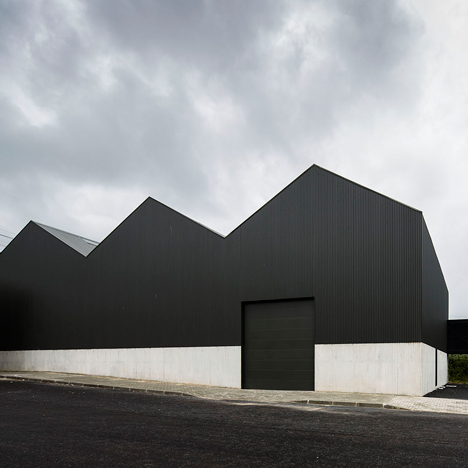 The house is orientated in the direction of the slope, presenting a gable to the adjacent road.

A wide window in the second white gable allows residents to survey the Rabaçal valley, which is now populated by vineyards and olive trees, but once formed the grounds of a roman villa.

"The house is located on the west side of the estate, protected from the main road, taking advantage of the best sun exposure, the surrounding trees and the views over the valley," explained the architect.

"The accurate position of the house was set so that there wouldn't be major changes in the terrain, maintaining the existing slope and preserving all the existing trees," he added.

A concrete parking space is cut into the ground between two stone walls by the road. Tucked beneath the slope of the terrain, it is largely undetectable from the house. Only its retaining walls are visible.

A flight of concrete stairs lead up from the open-air parking space and onto a series of gravelled platforms that step towards the door.

Inside, a glass box surrounds the entrance hall. It offers a windbreak against the exposed hillside, and provides a cloakroom that is separated from the dining room and kitchen.

Both the upper and lower floors are divided by utility rooms and a wooden staircase, which has steps that double as storage boxes. They separate the dining room from a lounge with a wood-burning stove at ground level, and two main bedrooms on the floor above.

Carefully placed windows in the flanks of the building face sideways across the hillside, but limit views from passing traffic. In one of the bedrooms, the doors of a wooden cabinet built around the windows also act as shutters.

"All the interior spaces have a particular relationship with the outside, through a set of big openings or small windows that intensify, in very different ways, the connection that the house establishes with the landscape," said the architect.