Portuguese architect João Mendes Ribeiro designed this corrugated steel and concrete warehouse for a components manufacturer, but prior to moving in its art collector-owner filled the space with work by Andy Warhol, John Baldessari and Antony Gormley (+ slideshow).

João Mendes Ribeiro was commissioned to design the Adémia office and warehouse building by António Albertino in an industrial area of Coimbra, a medieval city on the edge of the Mondego River that was once Portugal's capital.

The priceless artworks were part of a pop-up exhibition in the space, installed in the window of time between construction completing and the machinery associated with the manufacture of car parts moved in.

Though the use was seemingly unintentional, this is the second of Mendes Ribeiro's to host prestigious artwork. Previously, the architect converted an old volcanic stone tobacco factory into an art museum on São Miguel, the largest of the volcanic islands that make up Portugal's Azores archipelago. 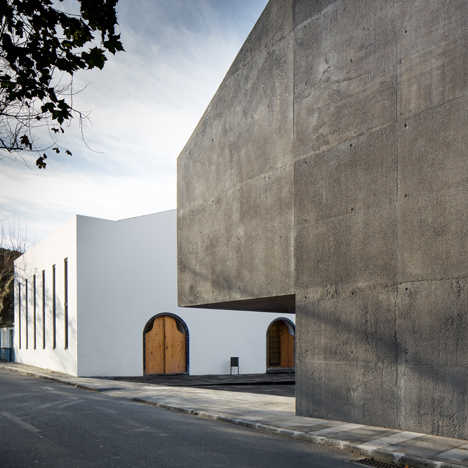 The Adémia building comprises two volumes – one a warehouse space and the other a sales office – amounting to an area of 1,555 square metres. The two sections are linked at first floor level by an aerial bridge that spans a courtyard.

Cast in-situ concrete walls run around the base of each volume, rising to meet the corrugated metal cladding that covers the upper section of each of the pitched-roof segments.

"The selected materials play a major role in the characterisation of the two volumes," said the architect. "A horizontal line runs across the two buildings, creating a clear distinction between two key materials: concrete and grey coated corrugated steel panels."

"Ultimately, the consistent use of these two materials throughout the project, and the inventive ways in which they are combined together, creates a unique identity for both buildings to act as a whole."

The warehouse is formed from five conjoined pointed-roof volumes creating a zigzagging outline, while the office has a single asymmetric pitched roof.

The office features white walls and pale timber window frames, while in the warehouse the concrete and metal construction is left exposed.

An elevated metal box stands on stilts at one end of the warehouse space. This provides a secure store and a means to access the aerial walkway that connects the two parts of the site.

Like the warehouse, the walkway features concrete slab floors and bracing metal elements. One side is clad in corrugated steel while the other has a perforated screen overlooking the car park and courtyard below.

Among Mendes Ribeiro's previous projects are a swimming pool and mirrored pavilion in an orchard and the extension of a wine-tasting hotel in Portugal's Portalegre district.

The temporary art exhibition ran between April and May 2015.