Set under an old brick archway on the Kent coastline, this timber-lined shop and cafe by Haptic takes its design cues from Scandinavian architecture and traditional beach huts.

The studio has offices in both London and Oslo, and Grady drew inspiration for the series of birch plywood forms that fill the interior from wooden beach huts on the English coast and Scandinavian cabins.

The geometric forms contrast the vaulted ceiling and arched openings of the double-storey Victorian arch, which is set below a road on Ramsgate's Royal Harbour, south-east England.

"They were designed to create more intimate moments in a very generous space," Grady told Dezeen. "They draw from a seaside vernacular; beach huts and simple structures along the Kent coast, but also the intimate nature of Scandinavian cabins, which I find warm and inviting."

"Our practice is used to working in more remote places in Norway and we enjoy spending time in Norway's summer houses," he added. "We've brought our Scandinavian sensibility to the Kent coast." 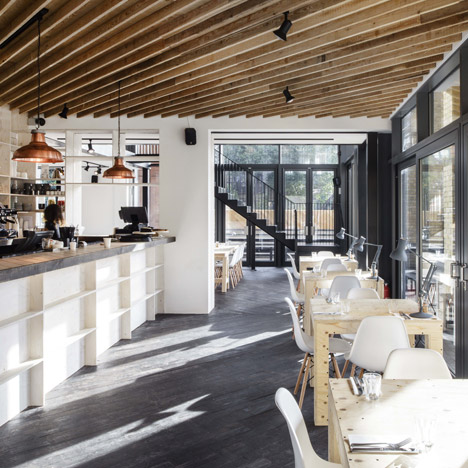 The shop and cafe are set on the ground floor of the space and look out through arched windows to the harbour, while additional seating occupies the upper floor.

The birch forms outline a series of pitched-roof nooks and form in the shop and cafe, which provide display spaces as well as concealing the stairs and toilet. Lighting illuminates the edges of the timber formwork.

"The architectural response draws from both its seaside location and Scandinavian ethos, with a series of pitched-roof volumes and surfaces, all created from a single material," said the architect.

The arch's positioning below a cliff road means its brick walls are prone to damp. So the cabinetry is built away from the brickwork, allowing the water-logged walls to drain.

Downstairs, the shop shelves are stocked with both British and Scandinavian homeware products and a collection of one-off mid-century furniture pieces.

A long communal dining table runs along one side of the space, separating the shop from the cafe, which serves dishes made from local produce. Copper framework on the ceiling above the table is used to suspend pendant lights.

Upstairs, the long flexes of pendant lights drape from the arched ceiling on the upper floor, which, like the ground-level shop is designed to be adapted for functions at night.

The position of the lights can be adjusted depending on whether the space is being used to host a supper club, exhibition or gathering.

"We've created many projects together over the years, but are most proud of this one," said Grady

Haptic, which was founded in 2009 by Scott Grady, Tomas Stokke, Nikki Butenschøn and Timo Haedrich. Its previous projects include a pair of larch extensions to a Victorian home in west London and a Norwegian hunting lodge with an underground cinema, swimming pool and spa.