Opinion: London auction house Christie's is auctioning off trinkets and clothing from the estate of Margaret Thatcher, one of the UK's most controversial prime ministers. Sam Jacob takes a closer look at some of the items on offer.

So this is the stuff that the V&A didn't – controversially – want. The stuff out of the Thatcher attic, the stuff that's now up for auction at Christie's. An auction that, we suppose, is designed to keep Mark in GPS's and Carol in "opinions".

But if the V&A doesn't want it, who might? What would you do with a piece of Thatcher memorabilia? What use could you have for a personal relic of that turbulent and transformative period of British history?

Depending on your political stripe, here's some suggestions. Perhaps you might want something to augment your personal Thatcher alter? Maybe you'd perform some kind of posthumous voodoo on the Baroness. You could try to extract some DNA to clone a second coming. Perhaps you'd slip on one of her outfits, prime an orange with poppers and, well, then just see what happens next? 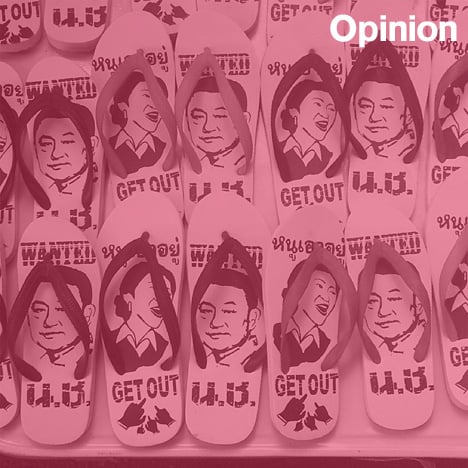 "These flip flops are politics disguised as leisurewear"

Before this little universe of objects is atomised to successful bidders, its worth taking a look at its content with Ruskin's words echoing in our ears: "Tell me what you like, and I'll tell you what you are." What does this collection of objects tell us about Thatcher herself? About the 1980s and her brand of Conservatism that dominated the era.

Well, here's a cultural breakdown of five of the items you might be tempted to bid on:

This is a quintessential English view, a view painted by many including Turner. It's a view deemed so important that it is England's only view protected by an Act of Parliament. This painting though is a particularly sickly Victorian version, a chocolate-box hazy, schmaltzy view full of nostalgia and myth.

Now this area is home to the baby-boomer royalty – your Jagger's and Townsend's, people who once represented the kind of 1960s counterculture that 1980s Conservatism tried to roll back. Perhaps for Thatcher it meant something even more specific.

After all, George Bernard Shaw used this very site as a thought-problem in The Impossibilities of Anarchism. He wrote: "It is clear that Richmond Hill will not accommodate all the people who would rather live there than in the Essex marshes". "The problem" he argued "with socialism is that not everybody can live on Richmond Hill". Perhaps it's this message that Poole's sickly image continuously transmitted, reminding Thatcher of an image of England that must always remain an elitist landscape.

A bowl with large script running around its inner hemisphere that reads "The Lady's Not For Turning". First, how did this even come into existence? Is this really what you'd like to be revealed every morning as you drain and dredge your cornflake lake? Perhaps it helped steel Thatcher every morning while Dennis read the sports pages.

Yet there's something weird too. By placing the text on hemisphere, the object actually encourages you to turn the bowl. The message (not turning) and the medium (turning) are at odds.

Perhaps this is a monument to Thatcher's private doubts. Written in a strange, elongated and wonky type that acts out in a declamatory manner, yet introverted within the bowl itself, could this tell us a psychological truth that could never have been publicly admitted?

A Falkland Islands, Anniversary of Liberation, 2007, gold crown, and a Fairbairn-Sykes-type commando knife with gilt bronze handle and steel blade

Money and weapons: this pair of items acts as a fitting nutshell-monument to Thatcher's premiership. The knife's blade is etched on one side with scenes of battle (the Belgrano perhaps?) and key battle sites on the other.

Ornamental and battle are strange words to see together, but perhaps they speak to a truth that many have been seen in the Falklands war itself – a conflict that was really a performance that allowed Thatcher to stage herself as a modern Churchill, boost her flagging poll rating and emerge victorious in the 1983 election.

A fawn gabardine raincoat with beige silk headscarf by Aquascutum, 1986

This is the entire outfit that Thatcher wore when she was famously photographed sitting in the turret of a tank at the NATO training camp in Fallingbostel, West Germany. There is something incredibly staged managed in this outfit, paired with the accessory of a Challenger 1 Tank. As ITN reporter Jon Snow said at the time, she seemed to be "cutting a dash somewhere between Laurence of Arabia and Isadora Duncan".

This ensemble managed to negotiate a sense of militarism while maintaining the business-like version of femininity that she usually preferred. It shows quite how important her costumes had become in managing a public image.

A set of 10 parcel-gilt miniature oil barrels by Cacchione, Milan

This ornament appears in the auction catalogue without explanation. A gift? Most likely, but from whom it came there is no record. Miniature oil barrels made in silver gilt, their stoppers formed from a diamond, the barrels piled on top of a lapis lazuli base seems to fetishise the lubricant of the 1980s.

A monument to a post oil-crisis boom? An icon celebrating the deregulation of commodity trading? Or perhaps a tribute to a certain kind of Postmodern value that emerged in the 1980s, where sign (in this case) oil and signifier (in this case silver and diamond) are cut loose from one another.

Overall the auction gives a clear aesthetic programme to the Thatcher persona. One that blends personal image – all those handbags that expressing a steely femininity and Victoriana flavoured jewellery – with nostalgic images of British landscape, peppered with English heroes of Churchill and Wellington.

It's an aesthetic that is clearly deeply set within the myths of 1980s Conservatism. Or even is that myth laid bare. We often dismiss the role of aesthetics within politics and current affairs as a surface. But in realty these surfaces might be infinitely deep: perhaps aesthetics are where the reality of a ideological programs are hidden in plain sight.