The corrugated plastic and plywood structure sloped backwards, and featured dark beams of wood arranged in a grid that forms the front of the hut, and extends across its roof.

These panels created exterior shelving for storing rocks and shells collected after surfing, and provided slats at the back of the shack to store boards.

The Surf Shack was entered via plastic-covered sliding doors, and light filtered through similarly transparent panels in the side of the hut. When not in use, the slanting door extended out of the side of the shack and could be used to rest boards after surfing.

Béhar's own collection of handcrafted custom boards was displayed alongside framed art hung on the plywood ceiling of the hut, which was fabricated by local studio Deft Union. 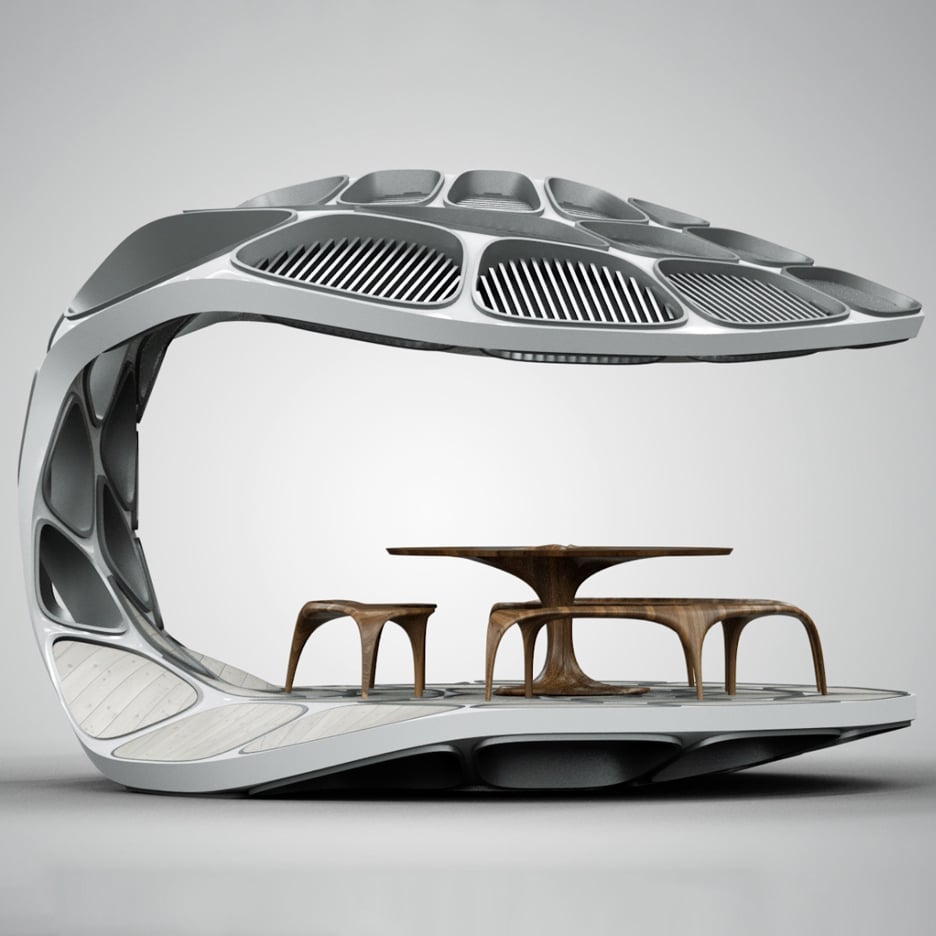 The shack was installed as part of an exhibition commemorating Béhar, who received this year's Design Miami Design Visionary Award – an annual prize that celebrates an individual's significant contribution to design.

An accompanying exhibition called Connecting was created at the Design Miami fair venue in Miami Beach. The stand showcased the designer's original sketches and prototypes for some of his best-known work, such as the activity-tracking wristband Jawbone and the One Laptop Per Child scheme that provides children with access to affordable technology.

Béhar set up his studio Fuseproject in 1999, and has since worked on projects that range from customisable furniture to a connected thermostat for British Gas.

His temporary surf shack was installed in the Miami Design District, and was on display from 1 December to 6 December 2015.

Miami Design District has been undergoing redevelopment, spearheaded by local developer Craig Robins, since the inaugural Design Miami fair in 2005.

"People began to realise that furniture could be collected like art," Robins told Dezeen during an interview last year.

"The Design District became more and more recognised as a cultural destination. Restaurants began to open, there were more art experiences," said Robins, who is also a co-founder of Design Miami.

The area is now home to a mixed-use retail building designed by Japanese architect Sou Fujimoto, and Aranda\Lasch-designed Tom Ford store, and a 14-storey apartment block created by Studio Gang.