Oslo offices Studio Vatn and Groma have transformed an industrial storage unit into a studio for a Norwegian film company, divided into different departments by translucent screens (+ slideshow).

Located in the centre of Oslo, the property features five-metre-high walls that were once tightly packed with shelving units.

The building now provides a base for the camera department of Storyline Studios, a production house that – prior to the move – had been in the same location since 1935.

Working in partnership, Studio Vatn and Groma chose to make few changes to the building's existing structure and layout.

They simply divided the space into two sections using translucent polycarbonate plastic screens. One half is a checkout and storage area for cameras and other equipment, while the other half accommodates workshops, a cinema and an optic lab.

"We aimed to organise the large open space by dividing the space in half – the division itself acting both as a technical screen and a security wall," architect Espen Vatn told Dezeen. "This maintains the potential of the large room for flexible use and gives an efficient and safe area for the daily work." 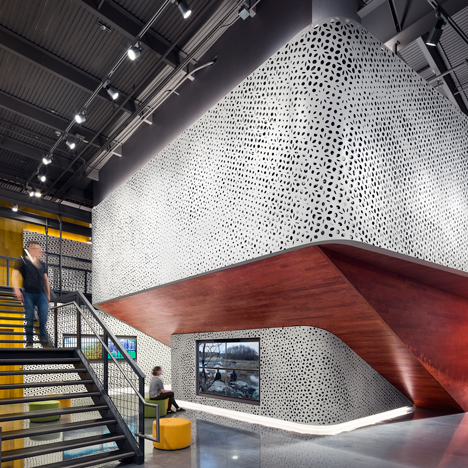 A muted colour palette was chosen to create a bright space for the workers, as well as to avoid disturbing the calibration of the cameras.

But some splashes of bright colours were added. In some places there are diffused behind frosted PVC panels, while elsewhere they are painted onto the ceilings of different work areas.

"The bright colours are used to to mark different zones, while also playing with the theatrics of the space – very much like one would on a stage set," said Vatn.

The team also updated the building's ventilation and electrical systems, and anchored a steel rig for cameras and equipment onto the concrete I-beams.

The open-plan nature of warehouses make them a suitable choice for film studios. Other recent examples include an industrial building in New York converted into a loft-style space for film production and photo shoots.

Photography is by Einar Aslaksen.