Stripy metal panels wrap the exterior of this Japanese house apart from a section at the front, creating a visual effect that prompted architect Takeru Shoji to name the building after a cardigan (+ slideshow).

Home to a family of four in Niigata, the house is called Cardigan Cardigan!!

The name derives from the main design concept, which is for a house with its body protected around the back and sides, but revealed to the road in front – similar to wearing a cardigan rather than a jumper.

"We thought it literally looks like the house is wearing a cardigan," said the studio.

To achieve this, Takeru Shoji Architects gave the two-storey building an L-shaped plan that frames a secluded terrace. The metal-clad wall appears to encase this outdoor area as much as it does the interior, and the roof stretches out to meet it.

"For the children playing on the road, the large roof becomes an arbor for taking shelter from passing rain or harsh sunlight," said the studio in a project statement.

"On the other hand, for the residents feeling comfortable at home, it becomes an umbrella mediating between their life and environmental difficulties: intense sunlight from the west in summer, freezing wind from the north-west in winter and the privacy from the neighbours," said the team.

The studio chose steel sheets coated in an aluminium-zinc alloy to clad the outer wall. The building's timber framework is visible underneath, while other sections of the facade are coated in a pale render.

A wooden fence separates the front terrace from a driveway, which is also partly sheltered beneath the overhang of the roof. 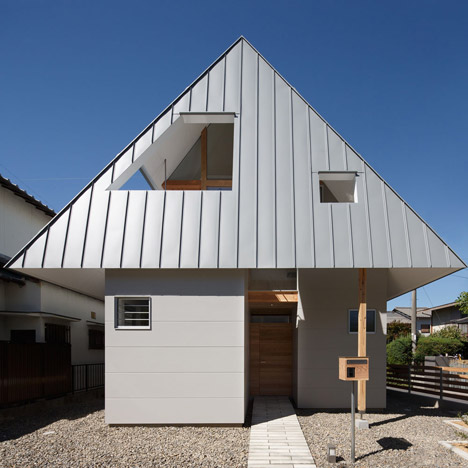 Inside, the entrance hall leads through to an open-plan living and dining space that takes up the majority of the ground floor. Floor-to-ceiling glazing links it to the terrace in front, allowing residents to dine outside in warm weather.

The kitchen is located at the back, on a lower level than the rest of the living space. This allows the residents to sit down on the floor and eat at the counter.

There are three bedrooms upstairs: a master suite for the clients and two smaller rooms for their two children.

Wooden flooring runs through the building, including a see-through corridor on the upper level.

"We designed the room to allow moderate distance among the family – which is often uniformly fixed – by creating a variety of places to attract people," said the team.

"[There is] extreme thinness and closeness between the ground floor and the first floor, a long corridor leading to the space under the large roof and a corner or a step everywhere," they added.

Cardigan Cardigan!! isn't Takeru Shoji's first building that references clothing. Last year he completed a house that he describes as having a big hat.

Photography is by Isamu Murai.