Located in the city's downtown district, the Durham Hotel is set within the former Mutual Community Savings Bank, designed by architect Perry Langston in 1965.

The exterior of the distinctive six-storey building features gold and white columns and a towering white cylindrical volume. It has been kept largely intact, with the addition of signage running vertically in individual letters.

The interior was gutted to make way for 53 guests room, a penthouse suite, rooftop lounge and an eponymous restaurant with an outdoor dining terrace.

The firm set out to create a hotel that, beyond accommodating visitors, would serve as a gathering place for the local creative community.

"We took inspiration from the Mid-Century Modern architecture, preserving much of the original structure, and mixed it with the arts and crafts feel of the nearby Black Mountain College," said Commune Design, citing the pioneering arts college established in 1933.

The walls of the double-height entrance are sheathed with black-and-white triangular tiles. Amenities include a shoeshine station and a newsstand with niche publications and vinyl records.

"At the hotel entrance, a complimentary shoeshine is available for guests hoping to sharpen their look, and a newsstand offers regional and hard-to-find niche publications, as well as a selection of vinyl records from local indie music favourite, Merge Records," said the hotel developer The Gentian Group. 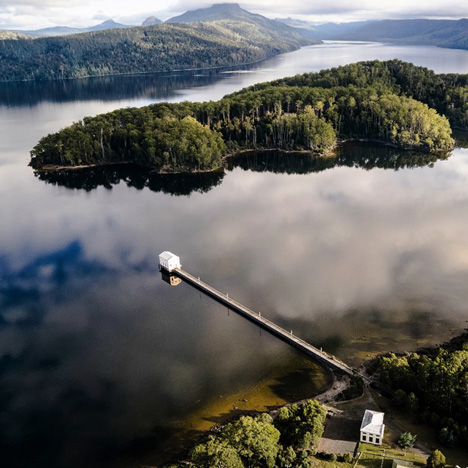 The lobby opens into the hotel's restaurant, which serves American food such as barnyard chicken and country ham.

The restaurant is adorned with geometric red-and-cream carpeting and chandeliers by LA-based lighting designer Robert Lewis.

"The dining room chandeliers are inspired by Yoshiro Tanaguchi's light fixtures in the lobby at the Okura Hotel in Tokyo," the firm said.

A curvilinear mezzanine – an original feature in the building – overlooks the restaurant and offers casual meeting spaces.

The mezzanine, along with the lobby, feature custom Plane furniture by California designer Michael Boyd in a black matte finish.

Rooms are stocked with goods by local makers and artisans, such as natural skin care products by Burt's Bees and "a personalised coffee program" from Durham's Counter Culture Coffee.

Raleigh Denim produced the bedspreads, and Small Trade Company made the staff uniforms.

The design team added a rooftop bar to the building, with furniture designed by James Garza and custom-made in Marfa, Texas.

Other recent adaptive reuse projects include Theaster Gates' conversion of an abandoned Chicago bank into an arts centre.

Photography is by Spencer Lowell.