Korean design studios Cloudandco and 11+ have teamed up to release a minimal house-shaped scent diffuser (+ slideshow).

The USB-powered device is made from semi-translucent plastic with a frosted finish to resemble a snow-covered pitched roof. 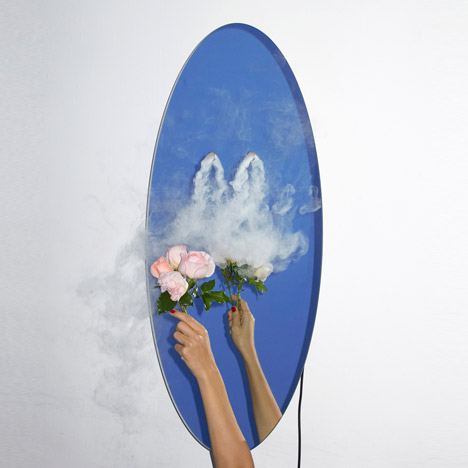 Lenticularis is a combined mirror and scent diffuser

A red wire extends out the base of the diffuser, and a ring of lights on the front of the house indicate when it is in use. When turned on, scented vapour floats out the top of the device – as if coming out of a miniature chimney.

"I had always been interested in minimal architecture and had a lot of inspiration from it," said designer Yeongkyu Yoo, who previously designed a humidifier shaped like a soft drinks bottle for 11+.

"Especially the image of a snow-covered house with a smokey chimney triggered this initial idea that this could be an emotional visualisation of the diffuser's fundamentals of operating," he added.

The diffuser generates smoke with ultrasonic waves which, according to 11+, allows owners to "enjoy the scent of the aroma oil in its natural state". 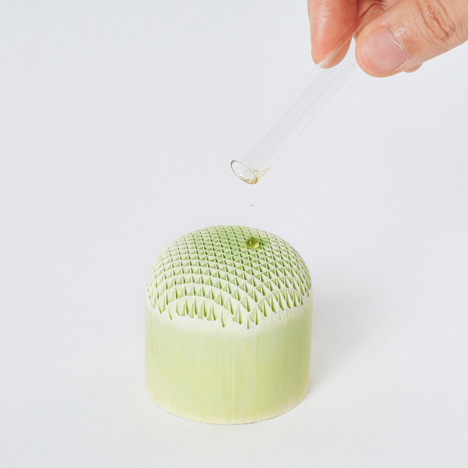 The device automatically turns itself off after five hours, and the roof of the house can be lifted off for storage or cleaning.

"It was intended to be as minimal as possible since the typical design of diffusers looks complicated or decorative," said Yoo. "Customers tend to be fed up with it easily and look for something new."

11+ has also released a USB-powered portable humidifier designed to resemble a glass bottle, and a clock that could be rolled to tell the time in 24 different cities around the world.

Aroma diffusers have been created in many guises, including an oval mirror by Royal College of Art graduates Sasa Stucin and Nicholas Gardner that emits a scented cloud of vapourand Outofstock's dip-dye diffusers made from ceramic exhaust pipes.