The third bridge by Santiago Calatrava in the Dezeen A-Zdvent calendar is the Campo Volantin Footbridge in Bilbao, a curved and arched structure with a surface of glass bricks.

Completed in 1997, the same year that Frank Gehry's Guggenheim opened in the Spanish city, the Campo Volantin Footbridge provides a pedestrian route across the Nervion River estuary, linking the museum with the nearby Parque Etxabarria.

It also goes by the name Zubizuri – a Basque word meaning "white bridge".

The architect and engineer, who was born in Valencia, wanted the bridge to appear slim and graceful as it crosses the water, so designed a structure with a gently curving deck. It bends at each end to form ramps that slope down to the ground. 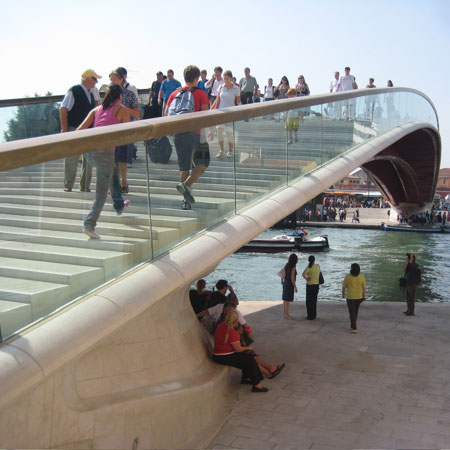 The bridge has a total span of 75 metres. The 15-metre-high arch overhead supports this deck with a series of steel suspension cables that extend down on both sides.

Writing in his book Calatrava Bridges, critic Alexander Tzonis wrote: "The intelligence, vitality, and originality of the bridge's curved configuration challenged the ordinariness and slow decline of the urban setting, bringing a message of hope and an invitation to imagine better conditions."

Acid-treated glass blocks give the bridge a translucent surface. But due to high vandalism many of the glass blocks had to be replaced, and the city later added a less slippery surface on top to prevent any accidents during wet weather.

Calatrava has designed over 40 bridges in his career, including the Chords Bridge in Jerusalem that featured on day three of the countdown and the Quarto Ponte sul Canal Grande we showed on day 17.

Photography is by Palladium Photodesign. Top image is courtesy of Shutterstock.