The Danish studio carried out the conversion and restoration of the pump stations as part of a wider land reclamation project along Denmark's largest river. A section of the river was rerouted during the project, creating new areas of natural interest that attract visitors.

The original pump stations, which have concrete facades decorated with vertical relief work, were engineered by Danish marine suppliers Myhrwold and Rasmussen in 1966. They were built to keep the river flowing and keep the surrounding land well-drained. 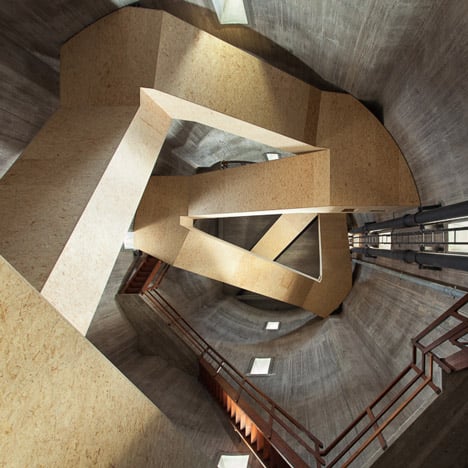 Their grooved facades are reminiscent of the furrowed fields that surround the stations and the profiles of artifically-created soil banks that control the river.

"The pump stations have an unsentimental rationality, broken only by the relief of the concrete facades," studio co-founders Søren Johansen and Sebastian Skovsted told Dezeen.

"What we wanted to achieve was to implement the conversion so you still saw each of the pump stations with new and old parts as a united whole," they added. "We wanted to challenge their massive and heavy character and strengthen their figure in the landscape, and we wanted to add a human scale and materiality."

Inside, the original pumps have been relocated from the ground floor hall to underground water chambers, freeing up this area for exhibition and event spaces with dining areas and toilets for visitors.

Wooden roof extensions with vertical cladding that mirrors the dimensions and pattern of the concrete facades provide protected vantage points and picnicking areas on the roof tops.

The treated spruce and plywood elements added to the exterior of the buildings will patina over time, helping the new structures match the "roughness" of the detailing on the original pump stations.

"This creates a direct link between the old structure and the new, while adding a new material and another texture that is pleasing to the touch," explained the architects.

"With this detail, the cladding and the main structure become one, reducing the complexity of the building," they said.

"By building on this motif the anchoring of the buildings into the surroundings and the history of the site is strengthened."

Denmark has been carrying out a wider overhaul of infrastructure across the country. In 2013, CF Møller completed a Corten-steel-clad gas compressor station in the south, and earlier this year the same firm unveiled plans to build Denmark's largest sewage-pumping station in Copenhagen.

BIG is also currently working on its design for a ski-slope topped waste-to-energy plant in the Danish capital, which will feature a smoke-ring-blowing chimney.

Photography is by Rasmus Norlander, unless otherwise stated.