The next big US project for Bjarke Ingels' firm could be an American football stadium for the Washington Redskins.

News reports surfaced this week that Danish firm BIG could be teaming up with the Redskins to design a new stadium in the Washington DC metro area.

BIG has never designed a sports arena, although the firm is in the running to redesign Barcelona's Camp Nou Stadium.

For the Redskins project, sources say the studio would likely be paired with a firm experienced in designing facilities for the National Football League. 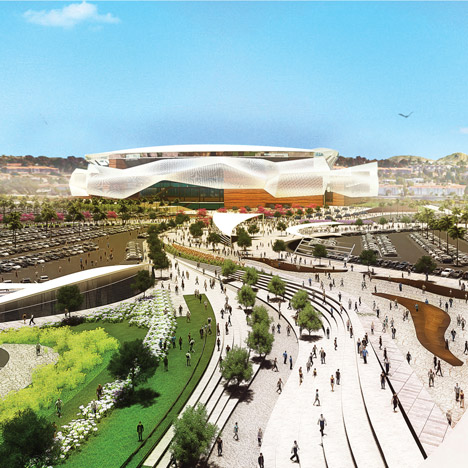 The Redskins have considered relocating from their current home in Maryland to DC or Virginia, according to reports, but the team have not yet revealed details. Plans for the new stadium are expected to be announced later this month.

BIG has unveiled a series of US projects since opening its New York office six years ago.  Current projects include the Two World Trade Center skyscraper in Manhattan and the new Google headquarters in Mountain View, California, which it is designing with Thomas Heatherwick.

The firm has not yet confirmed it is working on the Redskins project. Daria Pahhota, a spokeswoman for BIG, told the Washington Post: "We are working on an NFL stadium, but we can't identify who the client is."

The Redskins currently play at the FedEx Field, an 82,000-seat arena in Maryland that opened in 1997. It was designed by HOK Sport, now known as Populous.

The stadium has been criticised because views of the field are blocked in certain areas, forcing fans to stand to be able to see the game. It is also difficult to reach by public transportation, as it is a mile away from the nearest metro station.

The arena ranked 28 out of 31 stadiums in a Sports Illustrated report on NFL Fan Value Experience. The magazine said the oval-shaped stadium lacks distinguishing features and "looks like a big slab of concrete". "It has all the charm of an office park or a suburban mall, which it will likely end up being someday," the magazine stated.

Other BIG projects in the US include the Via 57 "courtscraper", two twisting apartment blocks at The Grove in Miami, a masterplan for Pittsburgh's Lower Hill District, and an office building in Philadelphia's Navy Yard.