A surplus of grey marble at a local production plant lead the Granada practice run by Luis Gonzalo Arias Recalde to cover the facade of A&T House in the material.

The narrow strips of marble frame deeply recessed windows in the four bays that project from the front of the house.

The pieces of marble vary in tone, giving the facades a mottled appearance. Some extend vertically, while others run horizontally.

Planning restrictions dictated the proportions of the property and its setback from the road, ensuring that it visually connects with the row of houses it affixes to on one side. 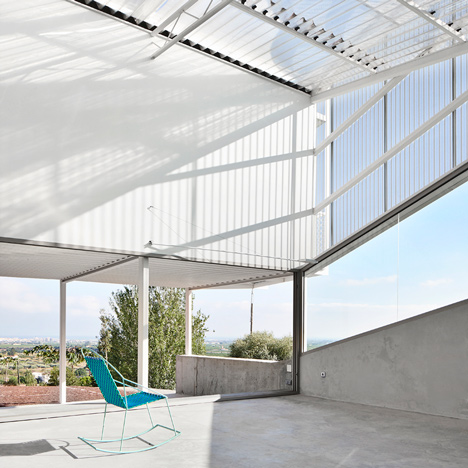 But the studio wanted to distinguish it from its neighbours, avoiding "the repetitive planning of the same type of house". Creating the irregularly arranged volumes allowed them to achieve this.

"The outside image of the house is one of twinned volumes that jut out and set back with respect to the main facade line – a fragmented arrangement that, nevertheless, is perceived as a unitary ensemble," explained Arias Recalde.

"Each of the projecting and inset volumes that make up the main facade are clad following a composition that wraps around their openings."

A pair of bays projects from both the lower and upper floor on either side of the entrance, which is set at the top of a stoop in the centre of the building.

Within, each of volumes houses a different room, which are all connected through a central atrium containing the staircase.

"Each of the rooms is associated with an independent volume or cube. These are either set back or pulled outwards depending on their needs regarding natural light, shade or privacy," said the architect.

The house has a partial basement used as a garage and a den, while the ground floor houses the living space. The first floor has three bedrooms, while a small "turret" forming the second floor contains a library.

Throughout, the spaces have grey-toned floors and white walls that match the colouring of the exterior.