Design student Luiz Zanotello has created a machine that uses digital methods to map the location of the mythical Sandy Island (+ movie).

The island was mapped back in 1876 by the ship Velocity, while caught in turbulent seas.

However it disappeared from digital and printed maps in 2012, when it was "undiscovered" after surveyors repeatedly failed to spot it physically. The New Velocity machine "seeks to reinsert the charting glitch".

"The machine records new datasets that support the further existence of the island by manipulating its digital presence," said Zanotello, who is currently completing a Digital Media master's degree at the University of the Arts Bremen. 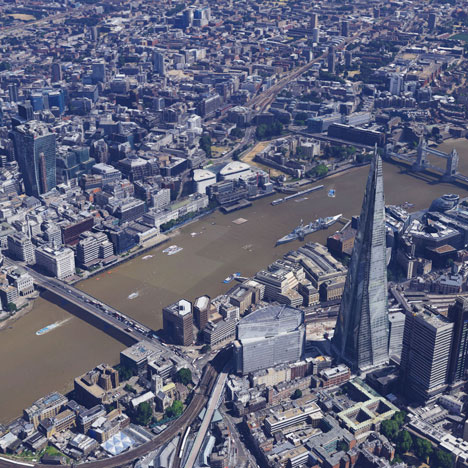 Google adds London to its growing list of 3D-mapped cities

New Velocity is composed of three main elements, which are used to recreate the journey and conditions of the original Velocity ship.

A proximity sensor is held on rods mounted on a wooden platform, and used to scan adjacent sand piles, which stand in for the original Sandy Island. The sensor's up and down movement has been designed to replicate that of a ship sailing the high seas.

The data is mapped and digitally visualised, with datasets created for coastline coordinates, water depth surroundings and topographical elevation.

Zanotello then feeds this data back to an online open data bank, as a way of perpetuating the Sandy Island myth.

"The project investigates a charting error that persisted in cartographic maps even after the advent of digital media," said the designer.

"It speculates how data and physical phenomena are entangled, and how in contemporaneity, the two have the same weight under digital media," he added.

"The New Velocity explores how the phenomenon of Sandy Island happens only under certain speeds, when piles of sand and piles of data have the same faulty consistency."