A sliding screen can reveal or conceal a glass office that cantilevers from the concave face of this concept house by American studio Fixd Architecture/Design (+ slideshow).

The cantilevered office space is a "nostalgic nod" to the glazed box that features in Frank Gehry's 1984 Venice Beach residence for the screenwriter and director Bill Norton, said architect Todd Fix​.

The fully glazed office in Fix's design sticks out from a concave facade made from solar panels, which has the dual purpose of amplifying wind to generate power and retaining energy from the sun. 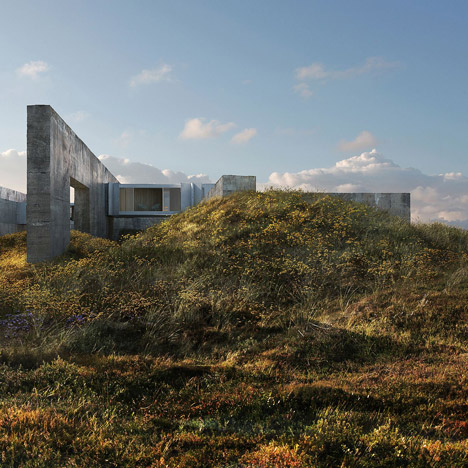 Mechanical tracks would allow the office to shed its insulated sunscreen enclosure in a process the architect likens to removing layers of clothing in warm weather.

Designed to be constructed in off-grid locations, Mõ Ventus House takes its name from the wind and solar energy used to power the design.

"This house attempts to find a new balance of spatial quality, embracing nature and using mechanical means to alter exposure and heat gain when needed with retractable screen and shell," said Fix.

"Mõ Ventus's office is an unusual workspace, allowing one to be literally and fully in the world while simultaneously, via cantilever, isolated from its distractions, creating an inspirational yet highly productive working environment."

A rooftop pool and garden are intended to help cool the house, while a pergola made from solar panels would supply additional energy.

"The house is designed to be holistically balanced and technologically driven while being seductively designed, sited, and detailed," said the architect.

Inside, a Carsten Höller-designed tube slide would transport residents from bedroom to beach. Here an outdoor amphitheatre with heated seating could be built into the facade opposite a weatherproof flat screen for outdoor film screenings.

The screen is designed to recede below the deck – which would also feature cooking pits and integrated dining furniture – when not in use.

The layout and rooms can be adapted to suit the client and site with floor areas ranging from 900 to 2,500 square metres and construction costs estimated between $2.5 and $5 million (£1.7 and £3.5 million).

Optional features include an au-pair suite, a dog run, indoor climbing wall and basketball court, and a garage for up to 10 cars.