Behind the traditional facade of this Spanish townhouse, Arrokabe Arquitectos has created a contemporary interior featuring a wave-shaped ceiling, a floating staircase and an attic music room.

Located in the historic city of Santiago de Compostela, the house forms part of a traditional row dating back to the 18th century. It was most recently the home of a priest, but had stood empty for around 30 years.

Local studio Arrokabe Arquitectos was tasked with adapting the property to suit a couple and their three sons.

The architects left the building's street-facing facade unchanged, so passersby would never notice the difference.

But inside, they completely rebuilt its structure with new timber-framed floors and wall partitions.

"The programme was adjusted to the existing volume of the main building," said studio founders Óscar and Iván Quintela.

"Thus, the vertical structural system of bearing walls was kept, whereas the rest of the structure was reconstructed in wood."

Named Casa do Medio, the renovated house contains three storeys, as well as a smaller loft level. The only original walls are those around the perimeter and an extra partition that splits the entire property into two halves.

A new staircase was installed in the same location as the original one, connecting all four levels.

It begins as a solid structure with wooden treads and an opaque balustrade, but as it ascends it changes in form. 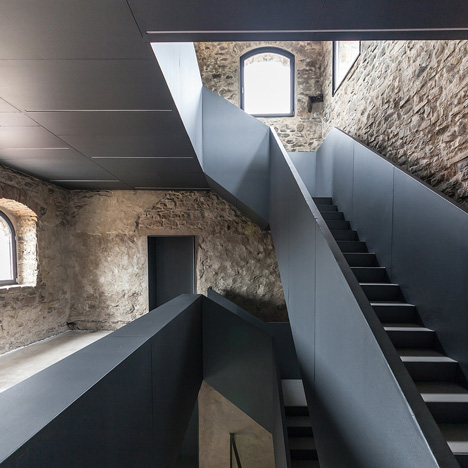 On the next level the risers are taken away and the balustrade becomes golden metal, while at the top the staircase comprises nothing but simple treads supported by slender white vertical rods.

"The new staircase becomes lighter as it climbs up the stairwell," explained the architects. "The construction of each staircase section, from the harder to the lightest elements, is related to the different nature of each floor."

Timber was also used to line the underside of the old roof. The white-painted ceiling features a series of curves that contrast the hard lines of the existing walls, but also conceals structural elements.

The sculptural ceiling frames the new attic spaces, which include a small landing and a music room. It is also visible from the second floor, where rooms include a family living space and three bedrooms.

The first floor accommodates a guest suite and a pair of ancillary rooms, while the ground floor contains an extra bedroom, a dining room, a lounge and a separate kitchen.

Wooden floors feature on all four levels, and a series of timber joinery elements create storage areas that include bookshelves, low cupboards and hollow benches.

Openings in the old partition wall form windows between rooms. Arrokabe Arquitectos has replicated this with a glazed opening between the staircase and one of the second-floor rooms.

Arrokabe Arquitectos also added an extra structure at the rear of the building that extends the first floor. Featuring a tiled floor surface, it functions as a conservatory-like space, while its roof provides a new balcony.