Perforated screens cover the windows of this cement-clad house in Melbourne by Jackson Clements Burrows Architects, allowing light from within to shine through circular openings (+ slideshow).

Jackson Clements Burrows designed the house as an "open-plan sanctuary in the inner city" for a couple and their cat Biggles in the city's Sunbury suburb.

Eschewing the gabled style and walled gardens of neighbouring residences, the 190-square-metre residence named May Grove is formed from two long and narrow blocks.

The blocks are clad in opaque panels of cement, while windows and garage doors have perforated metal shutters.

This perforated detailing also features in the brick walls of another Melbourne residence by the same studio, as well on a wooden holiday cabin on the Victoria coastline.

"The project explores the relationship between public and private space, and reimagines the vernacular single-fronted terrace typology," said the local studio. 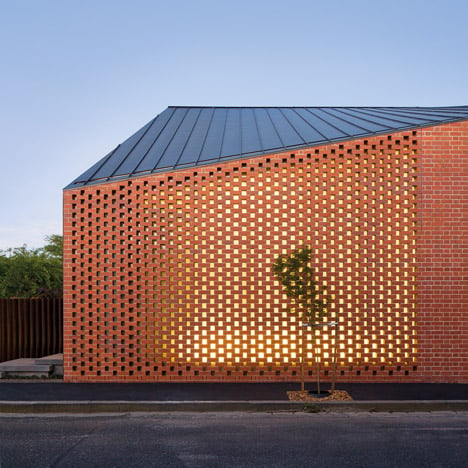 "The facade is abstract yet engaging and interactive with the street."

"The operability and translucency of the shutters contribute a level of engagement with the street, amplified in the evenings when the glowing perforations animate the facade to create a playful and vibrant entry forecourt," it added.

A wide driveway and double garage at the front of the block buffers the house from the street, and a wooden deck leads from the footpath to the east side of the house where the entrance is located.

"Unlike its neighbours, the house does not enclose itself with a front fence but creates relief with the open forecourt situated within a streetscape of concrete crossovers and high fences," explained the studio.

The area is simply finished with a wooden staircase and cabinetry, white furnishings and textiles with a neutral palette were selected to dress the space.

The perforated shuttering casts a distorted pattern of light and shadow over the white-painted walls, while other sections of the space are lined in dark timber.

Two bedrooms and a pair of bathrooms are set on the first floor, separated by a central atrium that forms a dining space on the ground floor. Sheer drapes can be drawn around this opening, which is lit from above by a narrow skylight.

A small patio set into a notch in the west side of the building is aligned with this opening, while a larger garden is set at the back of the house.